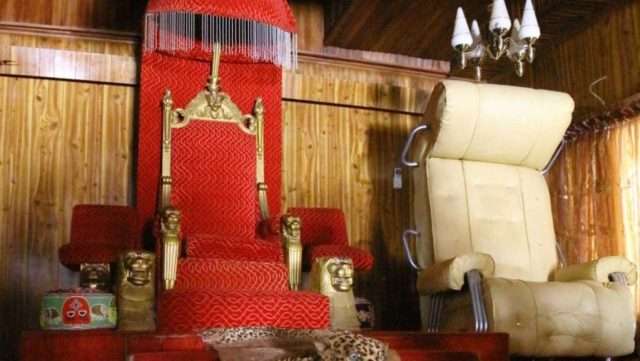 The 45th Alaafin of Oyo, Oba Lamidi Atanda Olayiwola Adeyemi was no doubt an accomplished monarch among the Yoruba traditional rulers.

Oba Adeyemi, who came from the Alowolodu royal family in Oyo, ascended the throne of his forefathers in January 1971 at the age of 31.

The monarch who reigned for 52 years joined his ancestors in April this year.

Recall this online news platform earlier published the Alaafin stool is currently vacant as a result demise of Oba Adeyemi.

Though the process of selection and appointment of the new monarch has started, it was however, gathered that controversies have continued to trail the selection process.

Some of the pending issues is the alleged marginalization of some families in the selection process.

Others are some pending court cases which are yet to be resolved.

Our correspondent learnt that no fewer than 119 princes from the various royal houses have indicated interest to succeed the departed monarch.

The Baba Iyaji (Head of Princes) of Oyo, Chief Mukaila Afonja made this disclosure.

He said that various things, such as educational background, wealth, influence, knowledge of the Yoruba culture and ability to speak Yoruba language without any mixup would be considered while choosing the next Alaafin.

DAILY POST, however, gathered that 61 of the princes have been disqualified, though the reason for the disqualification has not been revealed.

But, our correspondent learnt that those who were disqualified were princes from the families that the kingmakers said are not the one to produce the next monarch.

It was gathered that 58 of the contestants have been cleared.

The names of the 58 aspirants who were cleared have been submitted by the Baba Iyaji to the Bashorun of Oyo, High Chief Yussuf Ayoola Layinka.

The Bashorun whose position is likened to the present Prime Minister is the head of the Oyo traditional chiefs, known as Oyo Mesi.

DAILY POST learnt that all candidates who had been cleared are from the Agunloye royal family.

But, the non recognition of other royal families apart from the two has been described as discriminatory by some families who said that they should also be allowed to participate.

The disqualification of the 61 candidates who are said to be from other royal families made nine families from the Atiba lineage raise an alarm that they had been shortchanged.

But, despite the alarm raised by the nine families from the Atiba lineage, the kingmakers have commenced the selection process of the new Alaafin.

As part of the selection process, the kingmakers have invited the shortlisted candidates for interview.

This platform earlier reported the interview commenced last week Monday 4th and is expected to end on Thursday 15 September 2022 (today).

Meanwhile, Nine (9) families within the Atiba lineage have called on the Oyo State government to conclude all ongoing court cases patterning to the Alaafin stool before appointment of the new monarch.

The nine families in their explanation also urged the State government, to without wasting more time, stop the ongoing selection process.

The nine families made this disclosure during a press conference held at Akinmorin community in Oyo.

Spokesperson for the 9 families, Prince Afolabi Ademola Adesina, who noted that 11 families within the Atiba lineage were recognised as the occupants of the throne, wondered why only two families, Agunloye and Alowolodu have been rotating the throne among themselves.

Adesina called on the Oyo State government to use its power to stop the process until all issues are resolved.

He said, “There is never a declaration or discrimination among the children of Alaafin Atiba, and any king must be choosen from the Atiba’s family. Then in 1961, upon the dethronement of Oba Adeniran, Alaafin Gbagbadesein of Agunloye ruling house made a declaration between only two ruling houses to benefit the stool out of 11 main children of Alaafin Atiba.

“You will recall that the 1963 constitution housed the jurisdiction of the court to challenge anything chieftaincy matter, upon the fact that the so-called declaration is tied to the customary law of the Yoruba land which states that every member the children of a founder of a town can benefit from the stool of the forebearer; this is not in line with what late Oba Gbadegesin declared in 1961, with petitions and protests registering before the western government.

“When the late king, Oba Gbadegesin died in 1963, everybody started running for the stool of Alaafin, among the children of Atiba; when this happened, they urged our fathers that they should be patient for them to choose a king out of the declaration made by Oba Gbadegesin. And upon that, they will constitute a panel that will listen to the yearnings of all other children of Atiba.

“This was done by late Adeyinka Adebayo, the then military Governor of the old Oyo; he constituted a panel of enquiry headed by my lord honourable Justice Ladeinde Adekunle, who looked into the matter affecting the children of Alaafin Atiba, after this, every child of Alaafin Atiba, including those who have benefited from the stool of Alaafin in the past, everyone presented their memorandum which was looked into; after this, the commission of enquiry made this recommendation, it is against this background that we called this press conference.

“Upon the decision of the commission of enquiry in 1976, they declared all the existing ruling houses null and void, and constituted the Atiba ruling house.

“Another development, in year 2001 where the then Governor of Oyo State, Alhaji Lam Adesina presented through his secretary, Micheal Koleoso into law the white paper and decision of Oloko enquiry, with an option that Atiba Local Government should make amendments which will include all other excluded royal families. You will recall that Justice Ladeinde of 1976 declared 11 royal families to be the descendants of Alaafin Atiba, which are the Agunloye, Alowolodu, Adeitan, Adediran Ese Apata, Adesiyan, Iteade Abidekun, Olaniite, Adelabu baba Ibadan, Baba Idode, Tella Okiti Papa and Tella Agbojulogun royal families, and that all should be included in the new order which can benefit and contest for the stool of Alaafin.

“In year 2004, there was another development which is negative and was not in our knowledge; the late monarch, Oba Lamidi Adeyemi went to court with Oyo State Government to court amending or removing the sections of the consenting authority of the volume 2001 gazette, this happened without our consent and we were not even put in copy, and we are not in any way part of that.

“Upon that we are appealing to the Oyo State governments to look into this matter, as where there is an injury, there is always a remedy.”

Agunloye family, not Alaafin Atiba is the next ruling house for the Alaafin stool – Bashorun

Meanwhile, the Bashorun of Oyo, High Chief Yussuf Akinade Ayoola Layinka has said that the next family to produce the new Alaafin is the Agunloye family.

Layinka made this disclosure through a statement made available to DAILY POST by Bode Durojaiye, the Director of Media and Publicity to the Alaafin of Oyo.

He said the issue raised by Prince Adesina was between the Alaafin Atiba and the Oyo State Government.

He added that the issue had nothing to do with the Oyo Mesi.

“It has come to the notice of the Oyo Traditional Council (Oyo Mesi), a purported press conference organized by the so-called eleven families of Atiba Alaafin, in which they called for the cancellation of the ongoing interview for shortlisted aspirants to the Alaafin stool.

“The Head of Royal Families, Baba Iyaji, in conjunction with the Mogaji Agunloye Royal Family, Pa Prince Adeladan, had confirmed the ruling house for the next Alaafin stool to be the Agunloye family.

“Interested aspirants, who are authentic members of the family, had collected expression of interest forms and their names submitted to the Head of Oyo Mesi, High Chief Yussuf Akinade Ayoola Layinka 1 for the next step, which is the interview and in line with the due process.

“So, why is Prince Adesina crying wolves where there should be none, and keep misleading the unsuspecting members of the public. What is the justification for Prince Adeshina to seek for the cancellation of the ongoing interview, when in actual fact, the Alaafin Atiba family is not entitled to occupy the seat of the next Paramount Ruler?”