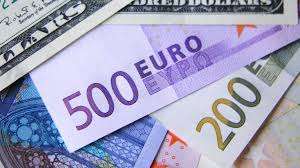 Europe’s single currency has dropped below parity against the dollar for the first time in almost 20 years, battered by growing recession fears in the euro area.

The euro was pushed down to $0.9998 on Wednesday after official data showed a surge in US inflation in June, increasing expectations for a further tightening of interest rates by the US Federal Reserve.

Since its birth in 1999, the single currency has spent very little time below parity. In fact, the previous time it did so was between 1999 and 2002, when it sank to a record low of $0.82 in October 2000. Euro banknotes and coins were only introduced on Jan. 1, 2002, with the currency only existing before that day as a unit of account for settling cross border transactions.

Within its relatively short two-decade history, the euro is the second-most sought-after currency in global currency reserves and daily turnover in the euro/dollar is the highest among currencies in the global $6.6 trillion market per day.