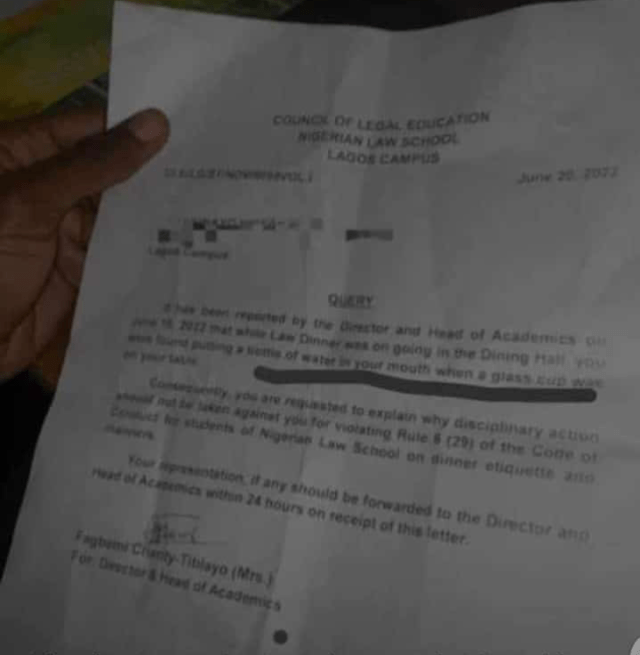 The Nigerian Law School has queried one of its students in Lagos campus for reportedly drinking water from bottle instead of using available cup during the Law Dinner which was held on the 16th of June, 2022.

The traditional law dinner is specifically designed for the students to meet members of the legal profession, including the benchers.

According to findings, it is held thrice with last one being held after passing final bar exam. It inculcate the dinner culture of learned gentlemen into the students.

In a letter making rounds the internet, dated June 20, 2022 addressed to the student whose identity is yet to be ascertained, the alleged conduct, according to the letter, is in violation Rule 6(29) of Code of Conduct for Students of the Nigerian Law School

The letter which was signed by the Director of Students Affairs, Fagbemi Charity-Titilayo (Mrs.), for the Director & Head of Academics.

“it has been reported by the Director and Head of Academics of June 16, 2022 that while Law Dinner was on going in the Dining Hall, you were found putting a bottle of water in your mouth when a glass cup was on your table.

“Consequently, you are requested to explain why disciplinary action should not be taken against you for violating Rule 6(29) of the Code of Conduct for students of Nigerian Law School on dinner etiquette and manners.” the letter reads in part

The student was therefore directed to respond within 24 hours. It reads, “Your representation, if any should be forwarded to the Director and Head of Academics within 24 hours on receipt of this letter.”