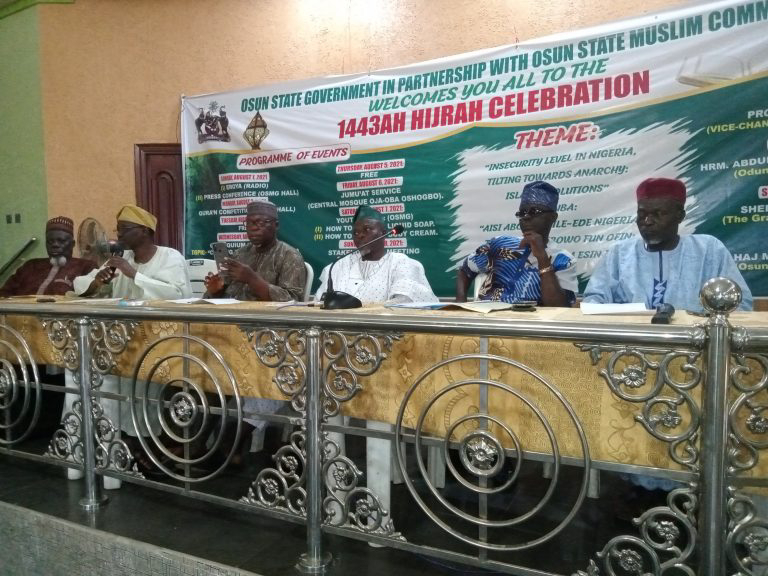 President of the Osun state Muslim community, Alhaji Mustafa Adeleke has described the killing of One Alhaji Moshood Salahudeen, during the recent clash that ensued between masquerade (egungun) worshippers of the traditional religion and members of the Qamar ul-Islam Society in Osogbo, as dastardly, saying justice must prevail.
Alhaji Adeleke make this call while addressing Muslim faithful at a Colloquium organized as part of the activities to mark this year hijrah 1443 held at the Osun state Muslim community hall in Osogbo.
He called on the government of the state to ensure justice on the matter saying the attack on the Muslims was a big blow against the Islam.
The Osun Muslim community president expressed hope that if they didn’t get justice here on earth, it cannot go Scot free hereafter.
The president in his speech said, “The recent clash between some Masqueraders and Muslims in the state is a big blow against Islam and we Muslims in the state will not relent in our efforts to make justice prevail on this matter.
“We will not take it easy if we are been cheated on this issue because Islam preaches about justice.
“How will someone who is alleged of killing a Muslim be going around freely on the street and still boasting that nothing will happen to him. But, if we didn’t get justice here on earth, we know he cannot go Scot free hereafter.
“However, we call on the state Government of Osun to critically look into this matter by not let it die down. They must ensure justice for muslims ”
Speaking further, The Osun Muslim community president also called on concern stakeholders in the state to not victimised any female Muslim students using Hijab as it is part of their right.
He also called on all examination bodies to avoid fixing examinations on Fridays to allow Muslim students observe Jumat prayer.
Also, speaking at the event, an Islamic scholar and academia, Professor AbdulFatai Makinde charged all muslims to always stand united on every issues so as to win challenges facing Islam.
He stressed that part of what causing agitations across the country is lack of trust and justice among political and religion leaders.
[carousel_slide id='8496']