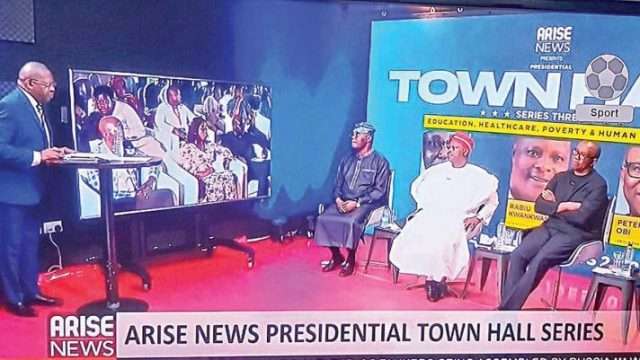 Tinubu, through his presidential campaign council, on Saturday, in a statement indicated that he won’t be attending any debate organised by the TV station, whom he accused of being biased against him. He also asked his supporters and spokespersons to boycott Arise TV.

The APC candidate left Nigeria on the eve of the event, just as his media team explained that he was going for an event at Chatham House, in London.

However, the trio of Atiku, Obi and Kwankwaso took turns to speak at the third series of the Arise TV Town Hall Meeting on the broad themes of education, healthcare, poverty and human capital while also fielding questions from the panelists consisting of senior journalists and development experts.

They all agreed last night that the issues of poverty reduction, healthcare, educational uplift and human capital development demands more serious attention. They also admitted that the increasing budget deficit must be tackled to allow government perform optimally, while security and proper education are required to pull Nigerians out of poverty.

Speaking on human capacity development, Atiku talked about giving incentives to the private sector to create employment. He also said he would link the labour market with the education sector.

“We have to get our kids not just educated, but rightly educated. By the time you educate them, they will be available to the private sector who should be the engine of growth. The private sector is the driver of prosperity in any given economy.”

Atiku maintained that under his administration, he would provide incentives to the private sector, most of which would go to the Small and Medium-scale Enterprises (SMEs) to encourage young people to set up businesses and grow them to create employment.

He recalled that during his time as Vice President, he commissioned a study, which proffered solutions to the high number of out-of-school children, especially in Northern Nigeria.

Atiku, however, expressed sadness that none of the Northern governors took steps to implement the report, which would have gone a long way in substantially reducing the number.

This, he said, would be reversed when he gets the chance to become president, noting that he did this successfully during his time as two-term governor of Kano State.

Speaking on the same subject, Obi said the Federal Government should take the lion share of the blame for the growing poverty in Nigeria. This, he said, is because it controls the issue of fiscal policy as well as security, which has degenerated to a point where farmers can no longer go to the farms.

He also lamented that investment in education has remained poor over the years. This, he said was largely responsible for falling standards and growing poverty.

Speaking about his plans to deal with the challenge of the scary rate of out-of-school children, especially in the North, Obi said: “Most of these children studied Quran. And if they studied the Quran, it means they are intelligent. I will meet them at this point and give them skills.”

Responding to questions on the alleged diversion of funds meant for local governments as a trigger for the mounting poverty, Atiku said: “We must look at the Constitution and determine how to ensure that local government funds are directly allocated to the LGAs and applied in the best ways possible.

“When I assumed office as VP in 1999, I was placed in charge of LG allocations. I gave instructions that all LGA funds should be transferred directly to the LGAs. After nine months, the state governments protested and said it was illegal.”

On how to reduce poverty, Atiku vowed to sustain the National Economic Empowerment and Development Strategy (NEEDS) and State Economic Empowerment and Development Strategy (SEEDS), which he said significantly reduced poverty“I believe the programme initiated by the PDP government, which brought down the poverty rate in Nigeria, should be sustained.”

“The Federal Government must work seamlessly with sub-nationals for us to have a meaningful development, particularly in reducing poverty.”

He said the country has no business subsidising petrol when the health sector is in need of funding, noting that the budget for the health sector is unacceptable and must be increased to at least 10 per cent if the country wants to stop experiencing the brain drain currently marring the health sector.He emphasised that as opposed to investing in petroleum consumption, government needs to focus on more critical areas such as health, education and fighting poverty.

His words: “These are areas where you have to do subsidy not in petroleum consumption. There are areas where government do subsidies and it is for productive and development areas that are critical like health, education, fighting poverty. These areas are where you need to invest, so, there is need for fiscal package to support the insurance, which will allow them to treat high to low diseases. It’s been done in Indonesia, in India, I will show you big nations that are practising it. We don’t need to reinvent the wheel, we just need to learn what is being practiced somewhere and do the same.”

On how to revive the health sector, Kwankwaso said: “Leaders should cultivate the habit of patronising our local health system, rather than going abroad.”

The NNPP presidential candidate assured that his government would not allow governors to suffocate the local governments financially if elected.

Kwankwaso noted that there was a need to look at the Constitution to ensure provisions could be made whereby local government authorities can get their money derived from the Federation Account directly.