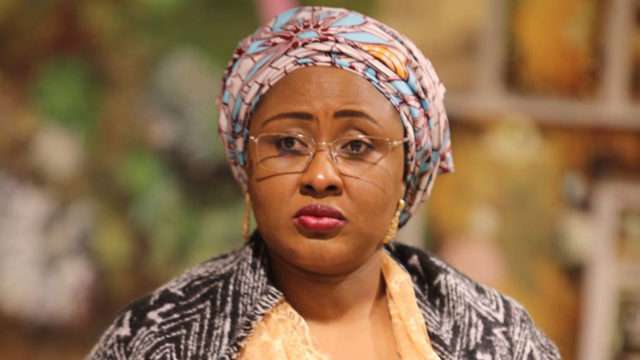 Wife of the President, Aisha Buhari, yesterday, withdrew the case against Aminu Mohammed, the final year student of the Federal University, Dutse, Jigawa State, who was arrested and detained for alleged defamation of character.

The Guardian learnt that the case withdrawal came on the heels of widespread condemnation of the action and intervention by rights activists, women groups, Amnesty International and the National Association of Nigerian Students (NANS) among other Nigerians.

According to the prosecution counsel, Fidelis Ogbobe, who withdrew the case on behalf of Mrs. Buhari, the withdrawal was due to intervention of well-meaning Nigerians.

He moved a motion for the withdrawal of the case, citing Section 108 subsection 2(a) of the Administration of Criminal Justice Act.While issuing the release warrant, Justice Yusuf Halilu of the Federal Capital Territory High Court commended Aisha Buhari for withdrawing the case, and called on parents to monitor what their children do in avoidance of such situation.

Aminu was arrested at Federal University Dutse on November 18, 2022, after Mrs. Buhari instructed a team of police detectives to track him. Prior to the withdrawal of the case, about 250 women groups from across the country under the aegis of Feminist Womanifesto demanded Aminu’s immediate and unconditional release from detention. The women also demanded the release of Zainab Kassim, a former social media aide to the wife of the president, Aisha Buhari.

Mohammed, a 500-level student of Federal University, Dutse, Jigawa State, had been charged to court and remanded at Suleja Correctional Centre, Niger State, for tweeting that the first lady was feeding fat on the poor people’s money

The groups, in a letter to the Attorney General of the Federation and Minister of Justice, Abubakar Malami, dated December 1, 2022, described the action of the first lady as a gross violation of human right to personal liberty, freedom of speech and right to seek legal counsel, adding that no female leader should be associated with such abuses of power. The letter signed by Convener of the groups, Abiola Akiyode-Afolabi and made available to journalists in Abuja on Friday reads in part: “Various news outlets have suggested that the arrest of Muhammed and Kassim was in obedience to orders from Mrs. Aisha Buhari and that the student was beaten in her presence. “We are concerned that despite the call from Nigerians nothing has been said by the office of the First Lady or the government in this regard to counter the narrative.

“The development is unacceptable in a civilian regime; the rule of law is expected to be prioritised in all arrests. Furthermore, in this period marking 16 days of activism against gender-based violence, no leader and certainly not a female leader should be associated with such abuses of power. No one should be above the law.

“We believe that the actions constitute a gross violation of human right to personal liberty, freedom of speech and right to seek legal counsel.

“These actions also infringe on Section 35, Chapter 4 of the 1999 Constitution of the Federal Republic of Nigeria, which states that an arrested person must be brought before a competent court of law within a reasonable time of 48 hours. It has been over 21 days since their arrest.

“These actions also infringe on Section 35, Chapter 4 of the 1999 Constitution of the Federal Republic of Nigeria, which states that an arrested person must be brought before a competent court of law within a reasonable time of 48 hours. It has been over 21 days since their arrest.

“We are worried about the continued detention of these citizens and its implications on the country’s human rights reputation. We are compelled to write to your esteemed office to demand an immediate investigation of the arrest, detention and assault of Aminu Muhammed and Zainab Kassim.

“We also demand the Office of the First Lady of Nigeria to respond to the allegation for the sake of public good and accountability.

“We hope you will use your good office to cause and investigate in this regard to ensure that the law takes its cause and both Aminu Muhammed and Zainab Kassim are released or taken before a court of competent jurisdiction.“Nigerians are watching! We call on you to do the needful.”