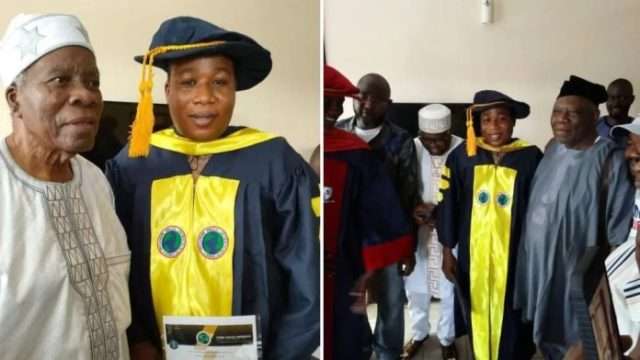 This is according to a photo story shared by Nigerian Tribune on Tuesday, November 1, 2022.

The photos showed the leader of Yoruba Nation agitators in an academic gown along with some elders who are probably of Yoruba origins.

Recall, in July 2021, the Department of State Services (DSS) launched a manhunt for Sunday Igboho, who had demanded independence for the Yoruba people following violence he attributed to Fulani herders in his region.

The DSS officials claimed they found military equipment and other weapons at the house. They also accused Igboho and his associates of planning to wage a violent insurrection against Nigeria.

He was later arrested in Benin while attempting to board a flight for Germany. But was later released from on health ground. However, the Beninese government is yet to expatriate him to Nigeria.

Sunday recently while wishing the Olugbon of Orile-Igbon, a king in Yoruba land, vowed not to backed off from the struggles for the independence of the Yoruba Nation, despite his travails