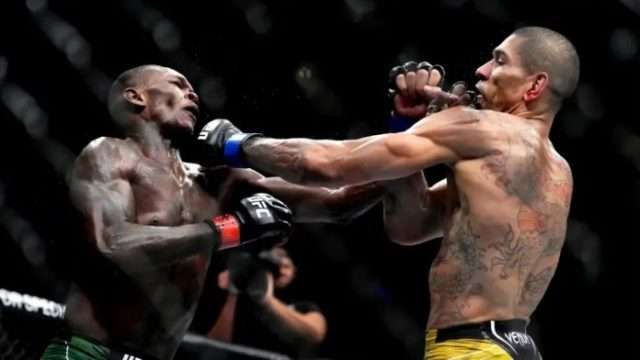 Alex Pereira has stopped Nigeria’s Isreal Adesanya in the fifth round to become the new UFC middleweight champion.

The Brazillian defeated Adesanya in the ht #UFC281 fight that happened on Sunday, November 13, 2022, at Madison Square Garden in New York City.

A flurry of punches from Pereira including an uppercut handed Adesanya his first defeat in the category and his third against the Brazilian after losses in 2016 and 2017.

Pereira becomes the new undisputed champion with just five fights in the UFC.

A visibly shaken, hurt and wobbly Adesanya could not keep up as the referee brought it to an end before the buzzer.

Adesanya had dominated in the opening rounds, unsettling in opponent in the third with a take down, but could not hold his own in the final round.

This comes barely three months after Nigerian Kamaru Usman was defeated at the UFC 278 main event by Leon Edwards to lose his UFC title as well.