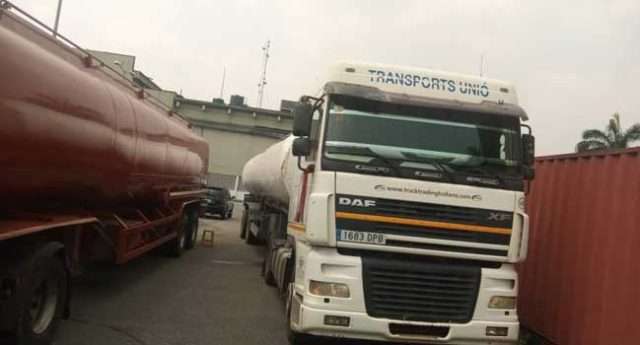 One suspect was also apprehended for involvement in oil theft and illegal dealings in petroleum products.

NSCDC State Commandant in Rivers, Michael Ogar while addressing newsmen in his office in Port Harcourt, explained that while three of the five trucks were impounded by a Joint Task Force for conveying 142,000 litres of petroleum products without haulage licenses and other required documents, the other two trucks were impounded by the Command’s Antivandal Team.

Ogar explained that the suspect loaded petroleum products in hidden tanks on the truck and used animal feeds to cover them so as to divert the attention of the security men on the way but for the eagle eyes of its men the truck was impounded and the suspect arrested.

The NSCDC boss added that following a tip off another long truck was impounded while conveying illegally refined Automotive Gas Oil (AGO) with noodles packs.

He assured Nigerians that at the expiration of a thorough investigation, the suspect would be charged in court while the tankers and the contents would be forfeited to the Federal Government after a court of competent jurisdiction has given judgment.

The NSCDC boss said the clampdown on illegal bunkering activities in Rivers has been largely successfully in past three months, noting that the soot in the state’s atmosphere has significantly reduced.