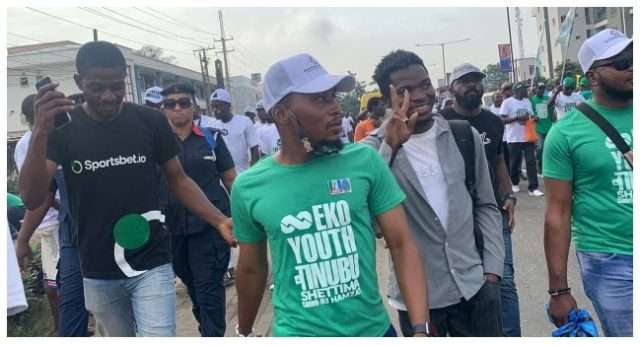 Youths in Lagos State on Saturday staged a peaceful rally to show support for All Progressives Congress (APC) presidential candidate, Bola Tinubu and the party’s governorship candidate in the state, Babajide Sanwo-Olu ahead of the 2023 elections.

The youths were seen with various APC paraphernalia including brooms and flags as they marched from Maryland on Mobolaji Bank Anthony way to Police College via Ikeja, the state capital.

The march saw a huge presence of scores of officers from the Nigeria Police Force (NPF), the Lagos State Traffic Management Authority (LASTMA) and the Nigeria Security and Civil Defence Corps.

LASTMA, in an advisory on Friday, announced the temporary closure of some roads in the state capital and adjoining areas to traffic on Saturday due to the march.

This is the third major rally in Lagos for Tinubu. The first was held on October 3, 2022 by women who took to the streets to show their support for Tinubu.

The second rally held two weeks ago was organised by by the Chairman of Lagos State Parks and Garages Management Committee, Musiliu Akinsanya, popularly known as MC Oluomo.

Tinubu, a former Lagos governor between 1999 and 2007 in the race for Aso Rock’s top job alongside other leading contenders like Atiku Abubakar of the Peoples Democratic Party (PDP) and Peter Obi of the Labour Party (LP) in a contest that analysts have described as three-horse race.

Sanwo-Olu was recently endorsed by Rivers State Governor, Nyesom Wike, a top chieftain of the PDP.

However, Jandor, while fielding questions on Channels Television’s Politics Today on Wednesday, berated Wike for such an action.

“Nobody expects that a party man, a national leader will do that for any reason at all, but it has happened and there is nothing we can do about it.“

My worry is this, he should be our role model at his level, as a governor, your office should come with a symbol of decorum,” the PDP governorship candidate in Lagos said.

Jandor also noted that he did “not do anything” against Wike to warrant such treatment, claiming that Sanwo-Olu has failed Lagosians.