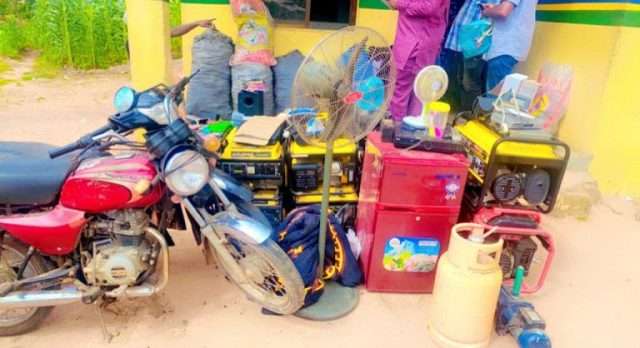 Tunde Oyekola, IlorinPolice detectives from the Kwara State Command on Sunday said that they have arrested three suspects who allegedly raped and robbed some female Students of Kwara State University (KWASU), Malete in Moro Local Government Area of the state.

The Police said that the three suspects arrested included; Ridwan Abdulfatai (20), Ibrahim Akorede (25) and Aliyu Apalado (25) all from the Oke Fomo area, Ilorin.

The arrest of the suspects according to a statement signed by Police Public Relations Officer, SP Ajayi Okasanmi, followed complaints lodged by some female students that they were robbed in their hostel at Malete, a University town in the midnight of Friday, October 7, 2022.

“Due to reports of armed robbery/rape cases recieved by Malete Divisional Police headquarters from attacked students and residents of Malete, a University town in Kwara State, the Commissioner of Police, Cp Paul Odama, pursuant to his earlier assertion that lawlessness of whatever nomenclature would not be allowed in Kwara State, while in office as the commissioner of police in the state.“

He set up a crack team of detectives comprising the anti-cultists, anti-kidnapping, anti-robbery and personnel of Malete Division with the mandate to break the suspects foothold and bring the culprits to justice.

“In carrying out the directive of the CP after recieving another report of an armed robbery attack from the trio of Adeboyo Omolade ‘F’, Adeyeye Adebola ‘F’ and Babatunde Hellen ‘F’ all 400L students of Kwara State University, Malete that at about 03:30am of October 7, 2022, they were all robbed at their hostel called ‘Downtown’ hostel by armed hoodlums and their property forcefully carted away.”

The statement continued, “While approaching the suspected hide out of the gang, the team was sighted by the hoodlums and the armed robbers took to their heels, one Ridwan Abdulfatai ‘M’ aged 20yrs, from Oke Fomo Ilorin was arrested by the detectives.“

Consequently, the suspect under intense interrogation confessed he is the leader of a robbery gang terrorizing the Malete community and its environs, stating also that he is also a jail bird.

“He led the investigators to effect the arrest of two other members of the gang, namely, Ibrahim Ridwan Akorede ‘M’ 25yrs of Oke Fomo area of Ilorin, and Aliyu Abubakar Apalado ‘M’ 25yrs, they all confessed to the crimes.“

The investigation also led to the recovery of the following items snatched on gun points during some of their operations; one locally made gun, one jack knife and charms,11 generators, two motorcycles, one small size fridge, one standing fan and one pumping machine.

Okasanmi said that effort was being geared towards arresting the remaining members of the gang adding that the Police Commissioner had promised to charge the suspects to court after conclusion of investigation.

The Police boss warned criminal elements in the State to either relocate from the state or be relocated to prisons adding “no stone would be left unturned in ensuring that Kwara State, a state of harmony remains truly, a state of harmony.”

He advised members of the public to always give information to the police as they could not work in isolation of the members of the society and promised to operate an open door policy in line with the spirit and letter of community policing.