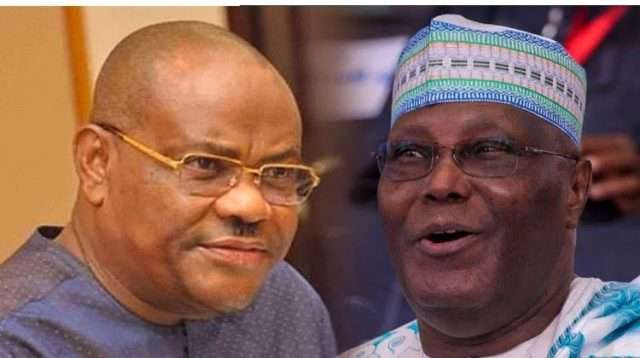 Governor Nyesom Wike of Rivers State, yesterday, told the presidential candidate of the Peoples Democratic Party, PDP, Alhaji Atiku Abubakar not to expect the party in Rivers State to campaign and vote for him in the 2023 elections.

“I have never seen how people will disrespect a state like Rivers and go choose enemies of the state without contribution from us. So, let’s campaign for those who have told us to campaign for them here in the state, the governorship candidate, the senatorial candidates, and others.

“Politics is a game of interest. If nobody accommodates the interest of Rivers State, then we have nothing to do with such people. If you say that you have no interest in Rivers, Rivers will not have your interest. It is only those who like us we will like.“

He stated that PDP in Rivers State has done well for the people, with such a feat acknowledged by President Muhammadu Buhari, making it more difficult for any other party to have a chance of winning the election in the State.In his remarks, the chairman of the Rivers PDP Campaign Council, Chief Ferdinand Alabraba said his team has accepted the task before them and is determined to give their best in delivering the consolidation team of the New Rivers Vision.

Meanwhile, despite his decision and that of his allies to shun the PDP campaigns, the party and the Presidential candidate will not sanction Governor Wike for engaging in anti-party activities, Vanguard has learned.

A source, who spoke with Vanguard in confidence, said both the PDP and Atiku have moved on with their campaigns.

The source also insisted that the party will not beg the Rivers governor or his allies to join the train.The source said: “The campaign has started, if they want to join, they are welcome and if they are not interested, good luck to them.

“To be honest with you, I don’t know if Wike or his allies are trying to retrace their steps but the mood around is that nobody is going to slow things down because of them.

The party has reached out to them and if they are not committed, the party cannot force them. It is a democracy and they have a right to stay where they are. That is the consensus.”

Speaking on how the party and its presidential candidate intend to campaign in states belonging to Wike and his allies, the source said: “What they have said is that they are not going to campaign for Atiku, they didn’t say they will block Atiku’s campaign. In those states, we have PDP structures there, if the state chairman will not be available, the vice chairman will be available. We will do our thing and get out of those states but what is more important is that and the thinking in the party is that many of these states are core PDP states; they also have candidates who are running for elections. So, there is a policy part of it and there is a reality part of it. When we get there, we will cross the bridge.”

The source, however, berated Wike for endorsing Sanwo-Olu in Lagos, describing his action as irresponsible.

The source said: “It does not make sense, it is irresponsible. If anybody had gone to his state in Rivers to say they are endorsing the APC candidate against his own, will he consider it good behaviour? He will not consider it but he has done it.

As I said, nobody gives a hoot; whether we win in Lagos or not is not by him but we will win Lagos and the presidential elections by God’s grace.”