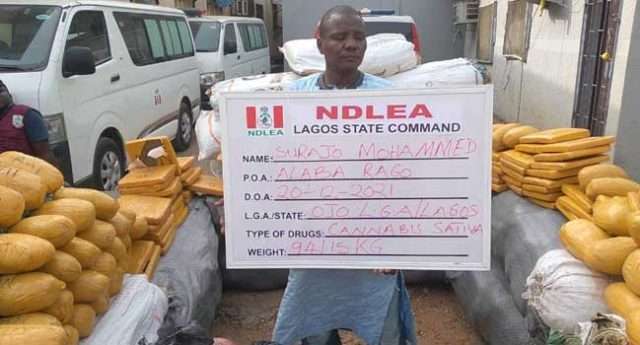 The National Drug Law Enforcement Agency (NDLEA) has intercepted 2,465,000 tablets of Tramadol at the Murtala Muhammed International Airport in Lagos.

NDLEA spokesman, Femi Babafemi, disclosed this in a statement, saying that the items weighing 2,256kg have an estimated street value of N1.04 billion.

According to him, the seizure on October 7 was made barely a week after 13.5 million pills of Tramadol, worth N8.8 billion, were found in one of the mansions of a billionaire drug baron in Victoria Garden City (VGC), Lagos.

The contraband – a consignment of 52 cartons – came into Nigeria from Karachi, Pakistan, with six different airway bills via an Ethiopian Airlines flight.

“Following credible intelligence, the Agency had shown interest in the consignment of 52 cartons that came into Nigeria from Karachi, Pakistan with six different airway bills via Ethiopian Airline flight, comprising seven cartons of 250mg of a brand called tamral and 45 cartons of 225mg, branded as tramaking,” the Sunday statement read.

“Soon after its arrival at the Lagos airport, the NDLEA called for a joint examination of the consignment with other stakeholders and after its information was confirmed by all, the 52 cartons of the seized substance which are above the recommended threshold for medical use and banned in the country, were moved to the Agency’s facility.”

The NDLEA spokesman also stated that the agency secured the conviction of a notorious drug dealer in the Alaba Rago area of Ojo, Lagos, Alhaji Surajo Mohammed.

Mohammed was convicted and sentenced to seven-year imprisonment by a Federal High Court in Lagos presided over by Justice Yellin Dogoro.

The conviction, Babafemi noted, came 10 months after his arrest.

Mohammed was arrested by operatives of the agency with 941.15kgs cannabis on Monday 20th December 2021 and arraigned in court in charge number FHC/L/370c/2021.

However, in judgment delivered last Thursday, the Judge gave the convict an option of a N7m fine, Babafemi revealed.