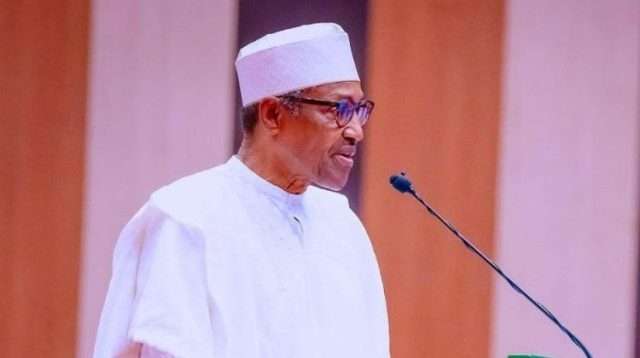 President Muhammadu Buhari has again promised to bequeath a peaceful and secure Nigeria to his successor as he leaves office next year.

“We will continue to root out all forms of banditry, criminality, terrorism and insurgency in the land.“The National Honours are not merely decorative. They remind us of an important part of our responsibility as citizens. We must always endeavour to do our best for our country. “

Speaking on the significance of the investiture, the President said, “The Award of titles of honour, decorations and dignitaries is a solemn and patriotic event at which President of the Federal Republic of Nigeria honours deserving Nationals and Non-Nationals, who have distinguished themselves in the service of the nation and humanity in accordance with the National Honours Act CAP. N43 of the Laws of the Federation of Nigeria 2004.“

The screening and selection of nominees for this year’s award as always, followed established broad criteria including but not limited to consistent and meaningful participation in community and/or national development.

”Rendering unsolicited, selfless and philanthropic services to humanity; outstanding sacrifice in the defence of a cause popularly adjudged to be positive, relevant and beneficial to the nation and community.“

Distinct act of bravery in the protection and/or defence of national interest, public peace, safety of life and property.

“Remarkable achievement in any field of expertise where the person’s activities in that field have made significant contributions to the attainment of national goals and objectives.“

Immense contributions towards the upliftment of community, state, nation and/or humanity through achievements by way of inventions and bringing outstanding honour and glory to the state through personal dedication and patriotic commitment.

Service with integrity is also a basis for the selection process.“Buhari noted that this year’s event was special in the sense that it was the first time since he took office roughly seven years ago that an event of this magnitude was being held.

He, however, said special investiture ceremonies were held in honour of MKO Abiola, Baba Gana Kingibe and Gani Fawehinmi, SAN, specially to “right the wrong done in the past to assuage our feelings and to resolve to stand firm now and the future for the sanctity of the electoral process and our democracy.“

He also recalled that a similar special award ceremony was recently held in honour of our country’s athletes for their spectacular performances in several competitions.

According to him, it is worthy of note that nation building involves a lot of sacrifice by the citizenry. Citizens who contribute to national development deserve to be encouraged and appreciated.

The President maintained that it was based on this premise that he reconstituted the National Honours Award Committee, Chaired by His Royal Highness, Justice Sidi Bage Muhammad I, JSC, retd,, the Emir of Lafia, a distinguished retired Justice and other patriotic Nigerians as members to recommend suitable Nigerians and our friends for appropriate recognition.

While commending members of the body for a job well done, Buhari said, “The committee has done a patriotic duty by diligently going through over 5,000 submissions and coming up with these recommendations.“

The patriotic Nigerians and our friends being honoured today, have distinguished themselves in various ways for the purpose of recreating a new Nigeria of our dreams through respect for the rule of law, image laundering, transparency and accountability in management of scarce resources.“

He equally commended those in the private sector who creditably discharged themselves in business, entertainment, hospitality, transportation and other forms of human endeavours to transform Nigeria.

The President also took out time to name some of the recipients and why they were chosen for recognition.He said: “ We have amongst the recipients today, Amb. Prof. Tijjani Muhammad-Bande, Dr. Ngozi Okonjo Iweala, Ms. Amina J. Mohammed and Chimamanda Ngozi Adichie, who are doing our country proud on the international scene. Our dear sisters are a source of inspiration to our young women that through hard work and dedication, they can achieve greatness.

“We also have on the list, Imam Abdullahi Abubakar, a religious leader who hid over 262 Christians in his mosque from attacks in Yelwa Gindi Akwati village, in Plateau State. He is a good example of religious tolerance we preach amongst Nigerians. I am excited that he is being honoured today with Member of the Order of the Federal Republic, MFR.“

Worthy of mention are our Artistes, particularly, our very own Damini Ebunoluwa Ogulu (Burna Boy), who won the Grammy Awards in 2020. He along with other artistes have repositioned the Nigerian entertainment industry and placed it on the global map. At the just concluded Dubai Expo 2020, Nigeria’s pavilion was a beehive of activities as our musicians’ entertained guests from around the world.

“The outgoing President was particularly glad that despite the present economic challenges, Nigeria still boasts of men and women of integrity; “Ms. Josephine Agu, an airport cleaner returned $12,200 found in a toilet at Murtala Mohammed International Airport, Lagos as well as Ogbanago Muhammed Ibrahim, a bank security man who found and returned $10,000.“

Today, we celebrate their dignity and strong strength of character by conferring National Honours on them. They are a shining example to our younger generation.

“I congratulate all the recipients today who will be joining the league of Awardees. I appreciate the non-Nigerian recipients and assure all of you that this administration will continue to provide the enabling environment for you to undertake your lawful businesses to allow you sustain your efforts at contributing to the development of our nation, Nigeria.”

Buhari said his administration will continue to partner with Nigerians and friends of Nigeria with like minds in its efforts to build the Nigeria of our dream where everybody will thrive to excel in their chosen fields devoid of parochial sentiments.

In his opening remarks, Minister of Special Duties and Intergovernmental Affairs, Sen. George Akume said that the successful nominees were drawn from various walks of life across the public and private sectors.

The National Honours Awards was established by the National Honours Act of No 6 in 1964. It took retroactive effect from October 1, 1963.According to Akume, “we pick 447 out of 5,000 nominees for various categories of the 2022 edition of prestigious National Awards.

The Act empowers the President to confer the Nigerian Order of Dignity to honour deserving citizens who have contributed to the development of and progress of the country in any field of endeavour.

In 2022, 447 citizens and foreigners dubbed “Nigerians and Friends of Nigeria,” received various honours ranging from the Grand Commander of the Order of the Niger and Federal Republic Medals.

Thirteen distinguished Nigerians who lost their lives before now were also honoured. They include: The late Chief of Staff to the President, Abba Kyari (CFR), former Chief of Army Staff, Lt. Gen. Ibrahim Attahiru and Aircraft Man Matthew Oyedepo.

The late Army Chief and Oyedepo died in the fatal military aircraft crash which claimed the lives of other senior military officers in May 2021.

Others included several Traditional Rulers including the Olu of Warri, Ogiame Atuwatse III, and the Emir of Lafia, Sidi Mohammad, who is the Chairman of the National Honours Awards Committee.