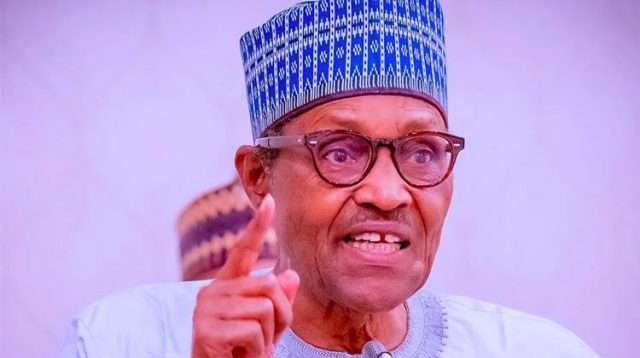 The President, Major General Muhammadu Buhari (retd.), on Monday, said given the lineup of completed and ongoing infrastructure projects executed in the past seven years, his regime has met the yearnings and aspirations of Nigerians.

This is according to a statement signed by his Special Adviser on Media and Publicity, Femi Adesina, titled, ‘With high-impact projects across Nigeria, we have met the yearnings of Nigerians, President Buhari declares at the last ministerial retreat.’

Themed, “Enhance security, fight corruption, transform the economy”, the retreat is meant to review the regime’s progress since the last edition exactly one year ago.

Buhari told a cross-section of Ministers, lawmakers, service chiefs and other top government functionaries that over 3,800km of roads have been constructed nationwide, while 38 new aircraft were acquired for the Nigerian Air Force to boost the fight against insurgency.”

In recognition of the importance of critical infrastructure in economic development and the quest of this administration to leave a lasting legacy, we have implemented high-impact projects across the length and breadth of the country that meet the yearnings and aspirations of Nigerians,” Buhari said at the last Ministerial Performance Review Retreat of his government at the State House, Abuja.”

Some of the notable achievements include the completion of 326km Itakpe-Ajaokuta-Warri rail line and railway ancillary facilities; the completion of over 156.5km Lagos-Ibadan standard gauge railway modernization project with extension to Lagos Port, Apapa.

”On road projects, this administration has constructed 408km of roads; 2,499km of SUKUK roads and maintenance of 15,961km of roads across the country.”

Key among these projects is the construction of 1.9km 2nd Niger Bridge linking Anambra and Delta States with 10.30km approach road; rehabilitation, construction and expansion of Lagos-Shagamu-Ibadan dual carriageway; the ongoing rehabilitation of Abuja-Kaduna – Zaria – Kano Road, among others,” he said.

Still on infrastructure, the President said over 941km of completed SUKUK road projects nationwide have been handed over.

This is aside from the reconstruction of 21 selected Federal Roads totalling 1,804.6km, under the Road Infrastructure Development & Refurbishment Investment Tax Credit Policy.

Buhari noted that the establishment of a National Carrier for Nigeria is at 91 per cent completion, and is expected to commence flight operations before the end of 2021.

Giving specifics of the economic milestones of his regime, Buhari revealed that Nigeria witnessed seven consecutive quarters of growth, after negative growth rates recorded in the second and third Quarters of 2020.

”The GDP grew by 3.54 per cent (year-on-year) in real terms in the second Quarter of 2022.“This growth rate represents a sustained positive economic performance, especially for the Non-Oil GDP which fell by 4.77 per cent in Q2 2022 against Oil GDP that grew by -11.77 per cent,” he said.

On the Communications & Digital Economy Sector, the President noted that Nigeria’s broadband coverage now stands at 44.32 per cent and is being reinforced by 77.52 per cent 4G coverage with the establishment of 36,751 4G base stations nationwide.

On efforts towards strengthening national security, the President said his government has substantially invested in arms, weapons and other critical military hardware as well as continuous training for the Armed Forces.

”The Nigerian Air Force has acquired 38 brand-new aircraft and is expecting another batch of 36 new ones, while the Nigerian Navy has been equipped with new platforms, sophisticated riverine, Rigid-Hull Inflatable, Seaward Defence, Whaler & Fast Attack Boats as well as Helicopters and Capital Ships.”

To boost the number of our Police personnel, 20,000 policemen have been recruited, trained, fully integrated and deployed in 2020 and 2021. This exercise has strengthened our community policing strategy which is enshrined in the Police Act, 2020,” he said.

On the fight against corruption, the President assured participants and guests at the retreat including the Keynote Speaker and immediate past President of Kenya, Uhuru Kenyatta, that the regime would continue to review and prosecute high-profile corruption cases and ensure speedy completion.

Speaking earlier, the Secretary to the Government of the Federation, Boss Mustapha, said the retreat will focus on three main areas. ”First, is an overview of ministerial performance within the last three years of the administration, presenting key achievements and identifying opportunities for improvement.”

Second will reflect on lessons and good practices from the Kenyan presidential delivery unit while the third is ways to accelerate the delivery of flagship projects and programmes of the Buhari administration before the end of the tenure in May 2023.

Mustapha announced that the President would sign an Executive Order on Improving Performance Management, Coordination and Implementation of Presidential Priorities of the Federal Government of Nigeria at the end of the third Ministerial Performance Review Retreat.