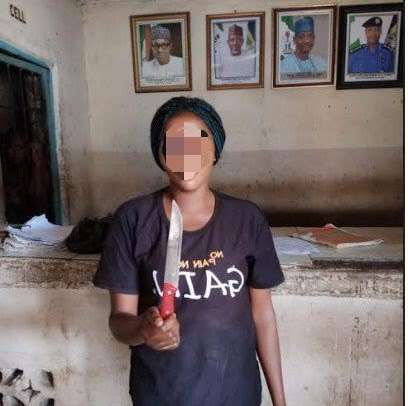 The Nasarawa State Police command says it has arrested one Alice Mulak for stabbing her boyfriend to death in the Karu Local Government Area of the state.

This is contained in a statement made available to our correspondent in Lafia on Friday by the State’s Police Public Relations Officer, DSP Ramhan Nansel.

According to the statement, police operatives attached to Mararaba ‘A’ Division in Nasarawa State led by CSP Musa Babayola have arrested one Alice Mulak ‘F’ of Ungwan Gwari, Karu LGA for stabbing her boyfriend to death with a Knife.

“Preliminary investigation revealed that the incident happened behind City Rock Hotel, Mararaba at about 0330hrs when the deceased and his girlfriend engaged themselves in fisticuffs as a result of a misunderstanding.

“Hence, the suspect was arrested and the knife used in perpetrating the offence was consequently recovered based on the directives of the Commissioner of Police, CP Adesina Soyemi.”

Nansel added that the suspect has been transferred to the State Criminal Investigation Department, Lafia for further investigation and subsequent prosecution.