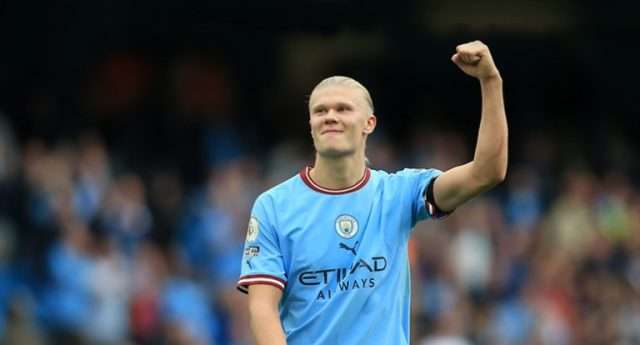 Erling Haaland saluted Manchester City’s “amazing” performance as the Norway striker made history with yet another hat-trick in a 6-3 rout of Manchester United on Sunday.

Haaland destroyed United with the latest display of his predatory finishing, in the process becoming the first Premier League player to score a hat-trick in three consecutive home games in the competition.

After 52 years without a hat-trick scorer in the Manchester derby, City were able to celebrate two trebles in the same game against their arch-rivals as Phil Foden also bagged a treble at the Etihad Stadium.

Haaland has made an incredible start to life with the Premier League champions since signing from Borussia Dortmund in a £51 million ($56 million) deal that already looks a bargain.

He has 17 goals in 10 games in all competitions for Pep Guardiola’s side, including trebles against Crystal Palace and Nottingham Forest, and has now netted in eight successive City appearances.

“Not bad. We score six goals, it’s amazing, to win at home and score six goals is nice,” Haaland said.“You see the passes we give each other. We always want to go forward and attack.

It’s what I love about the team.“In the end, it’s amazing. There is nothing more to say.”

Making City’s demolition derby even sweeter, both Foden and Haaland were City fans while growing up.

“It’s a dream come true playing in a derby being a City fan as well. It’s been a pleasure to be a part of this team,” Foden said.

Thanks in large part to Haaland’s blistering form, City sit just one point behind leaders Arsenal as they chase a fifth Premier League title in six seasons.

It was the first time United had conceded two hat-tricks in a top-flight match since a 6-0 defeat against Huddersfield in 1930.

Haaland and Foden were left to fight over the match ball — traditionally awarded to a hat-trick scorer in English football — as well as the man of the match award, which was given to both players.“

We can do one ball for the first half and one ball for the second half!” Foden said.It was a chastening first experience of the Manchester derby for United midfielder Christian Eriksen and boss Erik ten Hag.

Eriksen made no excuses after United’s four-game winning run in the league came to a painful end.

“Everyone feels it was a very bad day at the office. We started on the wrong foot. They had chances straight from kick-off. We can only blame ourselves,” Eriksen said.