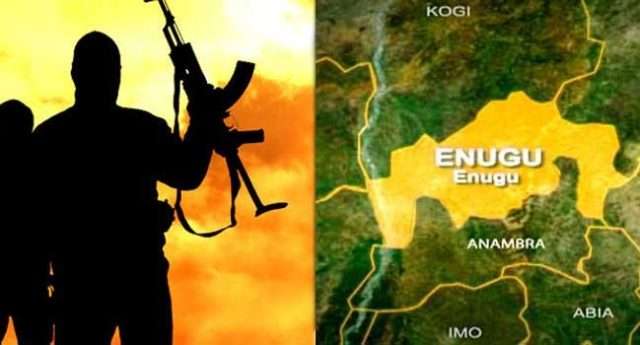 Ideemlawful Television gathered that the gunmen also carted away arms and ammunition in the unfortunate incident that took place in the early hours of Sunday.

While attacking the facility, the gunmen were said to be chanting, “no election, Police in Biafra land.”

Oji River is also home to the police college where new recruits are trained and deployed for services.

In a viral video, a building being used as a police station was seen on fire with the bodies of two young men lying by the perimeter fence of the station.

Some persons within the background could be heard in the video identifying the two victims as policemen, but another person said he could only identify one of them as a policeman attached to the station.

Although the police authorities are yet to confirm the incident, a resident of the area said the attack happened on Sunday.

Efforts to reach the Public Relations Officer, Daniel Ndukwe at the time of this filing of this report proved abortive.Gunmen have been attacking security formations in Enugu and other South-Eastern states.

Also in September, members of the Labour Party (LP) who were holding a meeting in Awgu Community, Awgu Local Government Area of the state were attacked by gunmen.