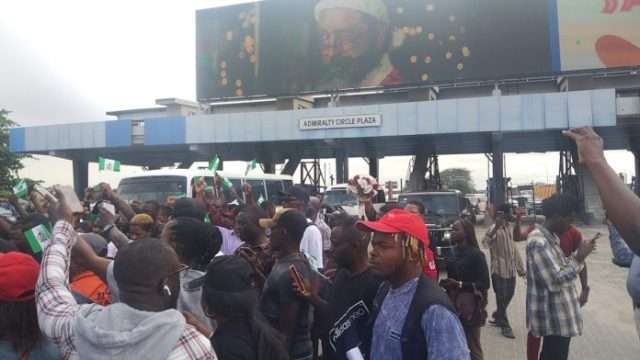 OPERATIVES of the Nigeria Police Force on Thursday, October 20, fired tear gas to disperse youths who gathered at the Lekki toll gate in Lagos to commemorate the #EndSARS protests.

It was a repeat of what happened last year, October 20, 2021, when youths also gathered at the Lekki toll gate to mark the anniversary of the shooting of unarmed protesters by soldiers of the Nigerian Army during the #EndSARS protests on October 20, 2020.

Till date the government has failed to take responsibility for the incident, even though ex army spokesperson, John Enenche, acknowledged the events of that night last week.

Although the gathering at the Lekki toll gate was planned as a peaceful march, a large number of policemen were deployed at the scene.

The situation began to change when a delivery personnel, with MD Koso, Jacob Jackson, alighted from his bike to pay his respects. He told The ICIR that he could have died during the #EndSARS protest exactly two years ago.

He said, “I could have been among the people that died,” before breaking down in tears. He was later interrogated by the police and taken away for some time.

He returned after 20 minutes and proceeded to leave the venue on his bike.A police officer, Raji Ganiyu told The ICIR that the youths were not expected to disrupt the traffic at the toll gate.

He said, “If they move in the cars, there is no problem. If they converge then there is a problem.”Later on, several protesters appeared on the scene, bearing caskets, blaring their car horns and singing solidarity songs.

Among them were rapper, Folarin Falana also known as Falz, social media influencer Feyikemi Abudu and a comedian, Adebowale Adebayo, also known as Mr Macaroni. They marched through the toll gate twice from Lekki Phase One to Oriental Hotel.

The group moved in two lines allowing vehicles to pass.

Falz said the essence of the march was to pay respects to those who lost their lives at the toll gate two years ago.

He said, “We are here to commemorate the lives of the ones that we lost to the hands of police brutality and to also ask for justice because justice has not been done and nobody has been punished or brought to book.

“A panel was set up and recommendations were made by this panel and it said people were killed and members of the Nigerian Army were culpable. The most important aim is to remember some of the bravest people that we ever had in this country.”

Going further he added that #EndSARS is not tied to any political party.

He said, “#EndSARS has never been a political movement. It has never had any affiliations with any political party. Even today we told people not to bring any political materials because we are not here for any campaign. #EndSARS is a singular movement that started as a protest against police brutality.”

Also speaking, Feyikemi Abudu explained that the procession was a peaceful march.

She said, “It is a procession and we are walking through the toll gate. Cars are not being stopped. We are here to remember people. The security had been fine. No one is causing trouble or stopping traffic.”

Abudu went further to state that no one has been held responsible for the killing of peaceful protesters at the toll gate two years ago.

Just immediately after Abudu spoke to journalists, some of the protesters moved to march through the Lekki toll gate for a third time. But police stopped them, claiming they had been disrupting traffic.

The policemen fired tear gas to disrupt the protesters. Some of the protesters were also detained for some time before they were released.