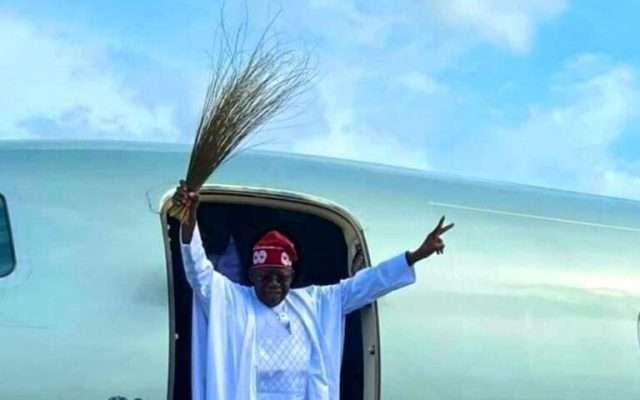 He dropped the hint in a statement via his verified Twitter handle.Ahmad, a member of the APC Presidential Campaign Council tweeted, “After days of intensive political consultations and meetings in London, our presidential candidate, Asiwaju Bola Tinubu is expected back in Abuja, later today.”

Recall that since Tinubu traveled abroad on September 24, his absence has generated controversies particularly about his health status.

Keyamo made this assertion in an interview with Channels Television’s Politics Today on Wednesday while speaking on the whereabouts and delay in the APC presidential campaign launch. Recall that Tinubu served as governor of Lagos state between 1999 and 2007.

He said, “The economy and the government Bola Ahmed Tinubu has been reputèd to be more in control of and be the leader of is that of Lagos state which is also an APC government.

So we have every right to campaign with the records of Lagos state.” Speaking on the whereabouts of Tinubu, Keyamo said Tinubu is not currently in Nigeria, adding that he will return to the country in “a couple of days.”

He said, “In my Twitter post on it, I said we are not trying to prove anything to anybody. Our candidate is not struggling to prove himself to anybody.“

This period of time, people make all kinds of enquiries — some mischievous and some genuine. To the mischief makers, we want to prove that the tail does not wag the dog; it is the dog that wags the tail.

“So, it is not at every point in time when you ask mischievous questions that we will be struggling to prove ourselves. We are not dancing to the tune and music of the opposition.

Meanwhile, on Tinubu’s viral video of him cycling on a fitness bike, Keyamo described cycling as a regular routine for Tinubu, adding that the APC presidential candidate was not trying to prove any point.His words, “People who are close to him know that he is an avid cyclist. He does that all the time.

It is his regular routine. So, we are not trying to prove anything to anybody.”