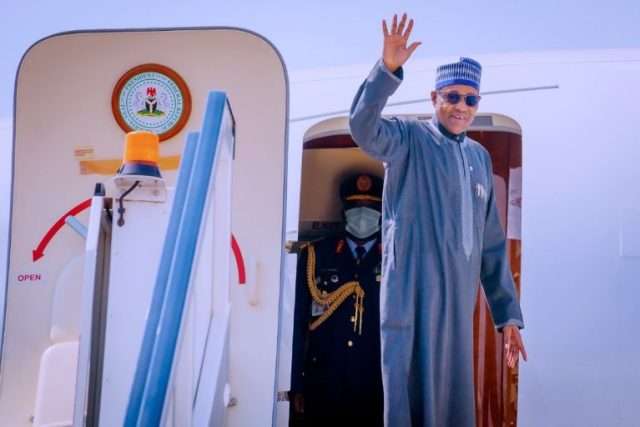 The President, Major General Muhammadu Buhari (retd.), will on Monday, October 31, depart Abuja for London, the United Kingdom for a routine medical check-up.

This comes shortly after he presided over an emergency meeting with security chiefs at the State House, Abuja.

According to a tweet by the President’s Special Adviser on Media and Publicity, Femi Adesina, Buhari is expected back in the country in the “second week of November.”

Monday’s trip will be one of several medical trips the President has embarked on since assuming office in 2015; spending at least 212 days abroad.On February 5, 2016, eight months after being sworn in, the President took his first medical trip to London, the United Kingdom, spending six days between February 5 and 10.

On January 19, 2017, the President embarked on his second-longest medical trip. Before leaving, however, he wrote to the Saraki-led Senate revealing his plan to travel to London on a 10-day vacation.

In the letter, Buhari said he would hand over to his Vice, Professor Yemi Osinbajo. Though the medical holiday was due to commence on January 23, 2017, Buhari left Abuja the same day.On March 10, 2017, he returned to the country.

The trip lasted 50 days.In May of the same year, barely two months after his last trip, the president departed for London for his longest medical pilgrimage lasting 104 days.

It is still unclear what ailment he was being treated for but the country was advised to “pray” for the President.

What followed were speculations and rife misinformation about his health status, with some presuming him dead and replaced with a body double.

The long treatment must have helped as the President would not visit London for another medical checkup until a year later in May 2018 when he spent four days on “medical review.”

Earlier, the president’s Special Adviser on Media and Publicity, Mr Femi Adesina, had announced that Buhari would proceed to London from Kenya for “routine medical checks that will last for a maximum of two weeks.”

Mr Adesina has defended Buhari’s medical trips abroad saying he “has used the same medical team for about 40 years.”

He also said it is advisable that the President stays with the team that has his medical history.