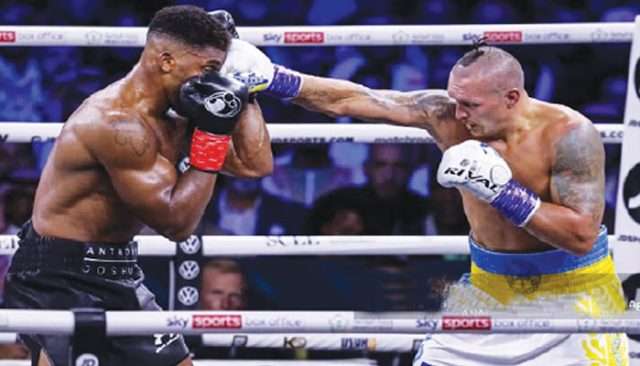 Anthony Joshua lost £3m (N1.4bn) worth of sponsorship money after getting outpointed by Oleksandr Usyk the first time they faced off last year, Ideemlawful reports.

The 32-year-old lost his heavyweight titles to Usyk when the pair fought in London last September. Joshua was on a mission to win back his belts when the rivals met for the second time in Jeddah, Saudi Arabia in August, but came up short yet again, as he suffered his second defeat in a row and third in the last four.

New financial records for Joshua’s company 258 Management have shown a 35 per cent reduction in turnover from February last year through to February 2022. In the financial year leading up to February 2021, Joshua made almost £8.5m through endorsement deals with the likes of Under Armour, Hugo Boss and Beats.

That figure dropped to almost £5.5m in the next financial year, meaning the former two-time heavyweight champion saw around a 35 per cent loss in endorsements.

Breaking down the numbers, Joshua’s biggest loss in revenue came from the Non-EU area as this reduced by £3.6m in the financial year leading up to February 2021 to £1.6m in February 2022.

Joshua’s stock hasn’t depreciated as much in the UK, as his marketing and sponsorship revenues went down from £3.5m to £2.9m in the region.

258 Management recognised the damage Usyk’s first win over Joshua did for the British-Nigerian’s image, as they said the loss of revenue in sponsorships and endorsements have come from third parties placing less value on his image rights.

“The sponsorships and endorsements division has decreased by 35 per cent from 2021 to 2022. This is as a result of third parties placing less value on the use of the fighter’s image rights,” a statement of the accounts read. “

The company faces a number of risks and uncertainties and the director believes the key business risks are in respect of competition from both within the UK and international markets.

“In view of this risk and uncertainty, the director is aware that the development of the company may be affected by factors outside its control. The directors anticipate the business environment will remain competitive. The directors believe that the company is in a good financial position and that the risks that have been identified are being well managed.”

Joshua was in talks for a heavyweight title fight against WBC titleholder Tyson Fury in recent weeks but the domestic clash is now seemingly off after both parties were unable to reach an agreement. Joshua’s promoter Eddie Hearn blamed the unrealistic deadlines Fury put on the fight being finalised as the reason for talks collapsing.