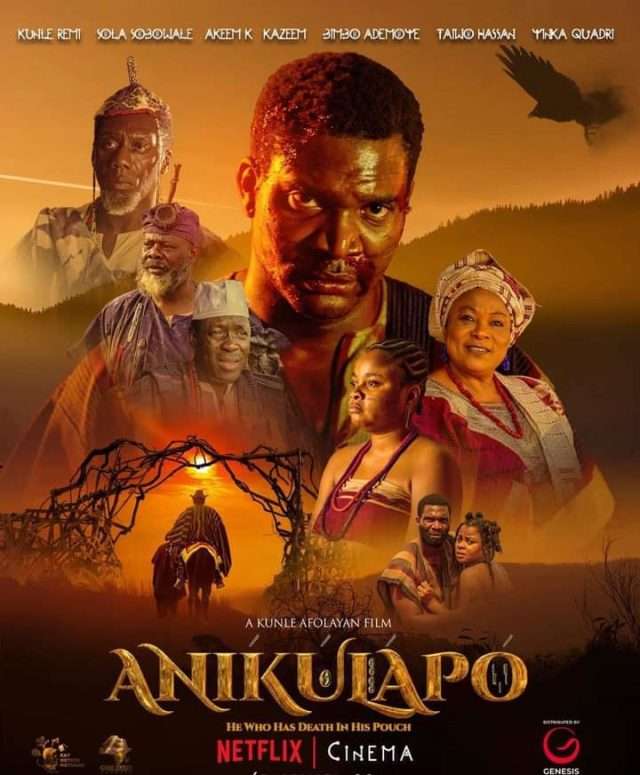 “I started working on Anikulapo six years ago and I wanted to make a series because it is a story that I feel would stretch like Game of Thrones,” he said on Channels Television’s Sunrise programme on Saturday.

The 47-year-old said he pitched the idea to international streaming and production company Netflix but the firm advised him to make it a film and continue the story depending on the reception.

Producer and director, Kunle Afolayan has hinted at a sequel to his much-talked-about movie Anikulapo.

Asked whether the recently released movie will get a sequel, Afolayan said, “Yea; the whole world wants the story to continue.”

Anikulapo, which translates as ‘death in the pouch, centres on a stranger who strikes an illicit affair with one of the king’s young wives, which eventually gets him sentenced to death after the affair was discovered.

Giving a behind-the-stage revelation of the movie on Saturday, Afolayan said the movie is an excerpt from Odu Ifa (Ifa literary corpus).

He said most times Muslims and Christians take lessons from chapters of the Qu’ran and Bible respectively and he thought of bringing some lessons out of a parable in Odu Ifa which is an embodiment of the Yoruba divination system.

The movie maker said his goal is to inform, entertain, educate and communicate cultural values. “I want to tell stories that capture values, cultural values, family values and all of that without necessarily neglecting the essence of why we do content which is entertainment,” he explained.

Afolayan further said that everything about the computer-generated imagery of the movie and other parts of production were done in Nigeria.

Oscar Snub
On the controversy surrounding the snub of Anikulapo, Elesin Oba, The King’s Horseman and King of Thieves by the Oscar selection committee, Afolayan said “it is just a shame” and a “mess” that Oscar committee members didn’t accept three solid epic films that could have represented Nigeria globally.

The producer advised Oscar to review its movie selection process, saying committee members are producers who could be political too.

“We ensured that we met all the criteria…If you have a film that qualified, why would eight members of the committee say no film is eligible? So, up till now, they haven’t come to explain what they mean by no film is eligible,” he said. (Text from Channels)