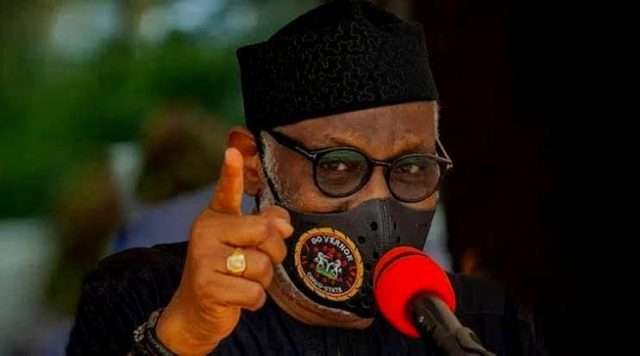 Nigerians should vote for experience, capacity not religion, ethnicity—Akeredolu

Pan Yoruba Socio-Political Group, Afenifere and the chairman of the South-West Governors Forum, Rotimi Akeredolu have traded words over endorsement of the Presidential candidate of Labour Party, Peter Obi.

Speaking yesterday during a Twitter session on the topic, ‘Asiwaju Bola Ahmed Tinubu and the Business of Nation Building’, Akeredolu had attacked the group insisting that it has been factionalised and that its endorsement of Obi’s presidential ambition does not reflect the wishes of Yoruba people

However, Afenifere in a swift reaction maintained that its position is final and insisted that those who seek equity that the rulership of Nigeria is not the exclusive preserve of the North must also do equity by not seeking to score the same goal for themselves by foul means.

He added that Tinubu has always remained a progressive despite the prevalence of political prostitution in the country. “Asiwaju has deep knowledge about the problems of this nation.

He has been part of the struggle to ensure that democracy is enthroned and that a true federal system runs in the country,”Akeredolu recalled that Asiwaju Tinubu was part of the founders of NADECO and participated in the struggle that led to the return of civil democratic rule in the fourth Republic.

“Tinubu’s contributions in the NADECO struggle can not be denied. As you know, when the 1993 presidential election was held, MKO Abiola was deemed to have won that election. But the military junta canceled the election and set up an interim government.

Afenifere ReactsBut reacting to Akeredolu’s claims, the General Secretary of Afenifere, Chief Olusola Ebiseni, in a statement, issued in Akure, said that the group position was irreversible.

Ebiseni said that the choice of Obi “was a well-considered corporate decision debated for over a year of regular monthly meetings, validly conveyed in the best tradition of the organisation.

“Those who seek equity that the rulership of Nigeria is not the exclusive preserve of the North must also do equity by not seeking to score the same goal for themselves by foul means.

The groups statement reads ” To start with, we wish to reiterate the principled stance of the Afenifere that the next President of Nigeria should be from the South, and all things equitably considered, from the South East, for which we consider Mr. Peter Obi, by his verifiable records as a two-term Governor of Anambra State, most competent and suitable.

“It is a well considered corporate decision debated for over a year of regular monthly meetings, validly conveyed in the best tradition of the Organisation.“

While we have our respect for Governor Akeredolu, and his colleagues of the Southern Governors Forum, which he leads, on their stand that it is only equitable that the next President of Nigeria, after the 8 years of Buhari of Northern Nigeria extraction, should come from the South, we will not lend our support to those who betray that cause for the lucre of Vice Presidential porridge or those who see equity only from the parochial prism of their own ethnic benefits.

“We wish to state for the umpteenth time, that Afenifere is not an apolitical Yoruba sociocultural Organisation but, from its inception, a political machinery as the embodiment of the worldview of the Awolowo School of Thought on how Nigeria, a country of ancient and entrenched nationalities, may best be equitably, inclusively and peacefully governed.“

These thoughts are encapsulated in the theory and practice of True Federalism in its equitable and logical dimensions. This philosophy, which has inexorably becomes the Yoruba view, also defines Afenifere’s position, either as the initiator of NADECO, on restructuring and the need not to deny the South East their turn of Nigeria Presidency.

“Those who strive to abridge or diminish the full effect of this covenant, on the altar of partisan or cheap tribal interests, cannot claim to speak for the Yoruba and Afenifere is not in competition with them.“

The Yoruba know the Organisation which speaks for them, taking hard decisions which others may initially despise but come round to embrace in the fullness of time. Let it be said that Afenifere is not alone in this decision that the next President of Nigeria should be from the South and South East specifically.