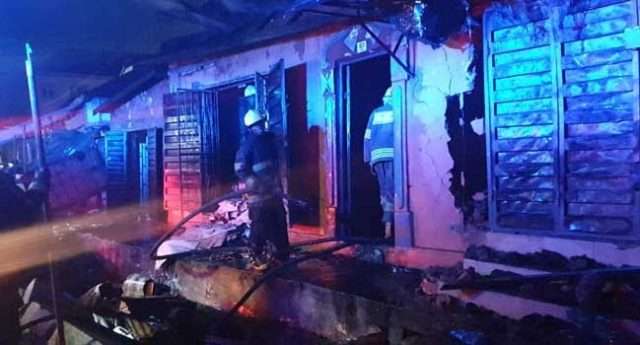 Tragedy struck in the Bariga area of Lagos State as a fire razed 10 rooms in a bungalow building in the early hours of Sunday, killing a 50-year-old man.According to emergency officials, the incident happened at 48, Jagunmolu Street, Bariga around 12:31 am.

The Director, Lagos State Fire and Rescue Service, Margaret Adeseye, confirmed the incident to Channels Television in a statement on Sunday, saying firefighters were quickly mobilised to the scenes.

She equally confirmed another fire incident in the Shomolu area involving four rooms and three shops in a bungalow building consisting of eight rooms and four shops.

Adeseye stated that information got to them of the Bariga incident after firefighters concluded quenching the Shomolu inferno.

According to her, the Ilupeju and Isolo fire crews that both responded to the two separate emergencies met them well alight and lamented delayed calls as the fire had wreaked havoc before they were alerted to salvage the situations.

“It was, however, unfortunate that a male adult of about 50 years of age was recovered and handed over to the State Environmental Health Monitoring Unit at Bariga while that of Somolu does not involve any loss of life or injury,” she said.