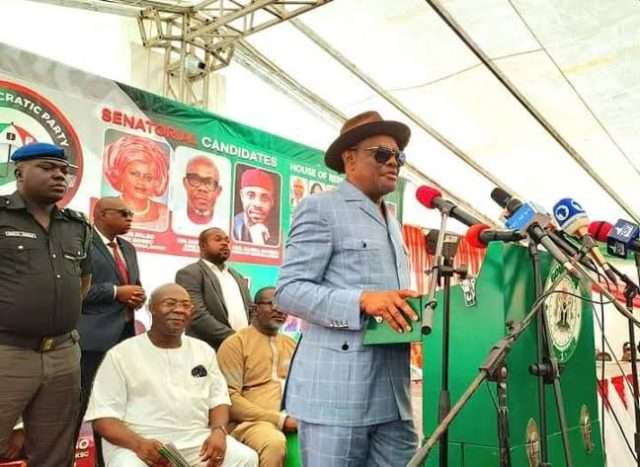 The governor, on Monday, October 24, 2022, during the inauguration in Port Harcourt, the Rivers state capital, also revealed why Atiku Abubakar’s picture, the PDP presidential candidate was removed from campaign posters.

He said; “The presidential candidate entered my state and picked members of the presidential council without the contribution of the governor. They said they don’t need me to campaign for them.

“I have never seen how people would disrespect a state like Rivers State and go and choose enemies of the state without”, he said.

Recall that since the outcome of the PDP presidential primary election in Abuja, Wike has been having a running battle with Atiku and Iyorichia Ayu, the party’s national chairman, for months, insisting that northerners cannot occupy both positions.

The governor and his allies have not attended any of Atiku’s rallies since the official commencement of campaigns on September 28, 2022.

In a related report, the All Progressives Congress (APC) presidential candidate, Bola Ahmed Tinubu, has mocked his counterpart from the PDP, Atiku Abubakar, pledging that he would not be a part-time president that would spend 50 percent of his time ruling the country from Dubai.

This was contained in a statement released in Abuja by Tinubu’s Media Officer, Tunde Rahman, shortly after his interactive session with members of the famous Tijjaniyyah sect in Kano.

The statement partly read, “I won’t be a part-time President who will share time between living in Dubai and Nigeria. I would concentrate attention and energy on confronting and surmounting Nigeria’s pressing challenges.”

Tinubu’s mockery was coming barely two months after his running mate, Senator Kashim Shettima, described the former vice president as a political tourist who only returned to the country every electoral cycle.

While referring to Atiku as a father he held in high esteem, Shettima said Nigerians wanted a leader whose worth and output could be felt at home.

At the meeting, members of the Tijaniyya sect, led by Sheikh Bashir Tijjani Usman Zangon Bareebah, presented a long list of issues the sect wants the APC Presidential candidate to address when he gets to office.

Among them are the inclusion of their members in cabinet and other government appointments, reduction in Hajj fares and assistance in concluding Tijjaniyyah University under construction in Kano.

Reacting, Tinubu said the answers to their demand were in his manifesto, which was unveiled on Friday by President Muhammadu Buhari.

While assuring the northern business leaders of a better business environment with well-thought-out policies, Tinubu identified the link between Kano as a centre of commerce and his economic plan for Nigeria.

He said, “There is a strong nexus between the place of Kano as a centre of prosperity and my plan for Nigeria. What I pledge is a revamped economy which will renew the hope of our people. Our country needs multiple centres of prosperity, and we intend to achieve that by adding value across all sectors of our economy.

“As I said during my speech at the Arewa House on Monday, Nigeria is sitting on a goldmine. There is no state in Nigeria that is lacking in one resources or another. We are determined to explore and exploit these resources to the maximum benefit of our people. Kano, for example, has huge agricultural potential and important mineral resources underneath its ground like gold, silver, nickel, tin ore and columbite. Each of these, if properly harnessed, can add significantly to our economy as a country.”