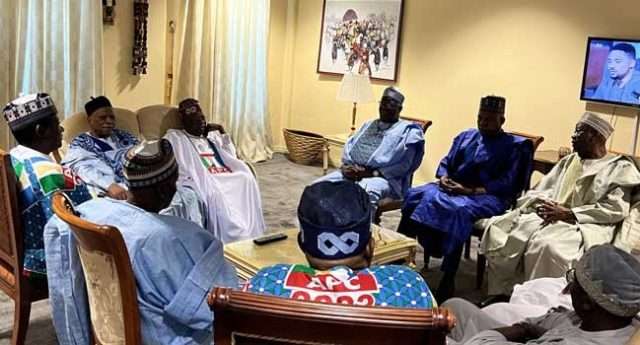 The All Progressives Congress (APC) is set to inaugurate its Women Presidential Team for the 2023 general elections.

The Special Assistant to the President on Digital Communications, Bashir Ahmad, disclosed this on his Twitter handle on Monday.

He shared an image of the APC presidential candidate, Bola Tinubu and his running mate, Senator Kashim Shettima as well as the party’s national chairman, Senator Abdullahi Adamu.

They were at the State House, Presidential Villa in a meeting, although the exact venue cannot be ascertained at the time of this report.

Also in attendance at the meeting is the Director General of the Presidential Campaign Council and Plateau State Governor, Simon Lalong, among others.

The development seems to have laid to rest the purported rift between the ex-Lagos State governor and the APC Chairman.On September 29, Adamu accused Tinubu of appointing members of the Presidential Campaign Council without the approval of the APC National Working Committee.

Adamu demanded the immediate withdrawal of the presidential campaign council list, warning that any sign of disarray in the party’s ranks would undermine the spirit of the campaign and give an undue alarm to party followers across the country.

But the APC spokesman, Felix Morka, in a statement said the letter did not emanate from Adamu, adding that the party will not be distracted by those he described as detractors.

“To be clear, the “DRAFT” letter did not emanate from the Party. An UNSIGNED letter that marks itself as a ‘DRAFT’ cannot and should not be attributed to its purported author,” Morka said.“

As such, an unsigned “DRAFT” letter of the kind in circulation is patently unnecessary and of no qualitative value to engagement between the Party and the PCC.

“We will not be distracted by the wishes and actions of detractors that wait gleefully but in vain for some kind of crisis to erupt between the Party and the PCC.”

The accusation comes days after the APC candidate unveiled a 422-man committee comprising political heavyweights and other notable members of the party to pilot the various sub-committees of the campaign council.

Campaigns for the 2023 general election officially commenced on 28 September in line with the timetable and schedule of activities of the Independent National Electoral Commission (INEC).