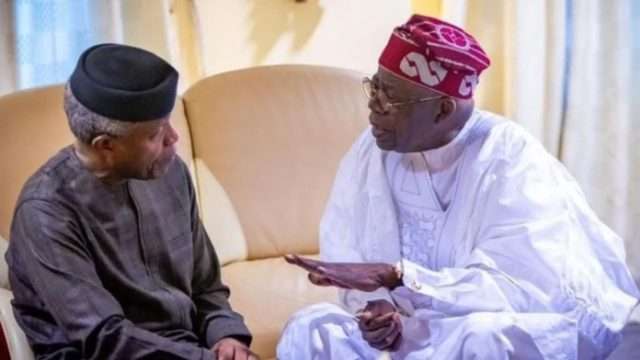 The All Progressives Congress (APC) presidential candidate, Bola Ahmed Tinubu, has said he does not have anything against Vice-President Yemi Osinbajo.

The former Lagos state governor stated Monday when he addressed a group in Kano that worked for the presidential bid of Osinbajo.

In the build-up to the APC presidential primary, there had been varied reactions after the vice-president declared his bid to contest the presidency with Tinubu also in the race.

While some claimed it is not right for Osinbajo to contest against Tinubu, his erstwhile boss who nominated him as Buhari’s running mate back in 2015, others opined that Osinbajo has the right to contest as the constitution demands.

Speaking on Monday about the issue for the first time in public, Tinubu said there was no issue between him and the vice-president.

“I have nothing against him. I have been to his house after the primaries,” Tinubu said.

“I saw him on the day of the goodwill message [at] the retreat organised by the president.

Meanwhile, Yemi Osinbajo has directed all staff of his office who are part of the APC, Presidential Campaign Council, PCC, to give their best to the party’s presidential candidate, Bola Ahmed Tinubu.

Osinbajo issued the directive during a meeting with his staff members who are part of the PCC.

Disclosing this, an aide to President Muhammadu Buhari, Ajuri Ngelale, said Osinbajo stressed the importance of the assignment.

Ngelale, who is one of the spokesperson for the Tinubu-Shettima campaign organization, said the Vice President appealed to those concerned to carry out their duties without hindrance.

He also urged members of the public to ignore any information stating otherwise.

In a tweet, he wrote: “It must be noted that in a meeting today, H.E. VP @ProfOsinbajo has encouraged all OVP staff — who were privileged to be appointed into the @officialABAT 2023 Presidential Campaign Council — to give their best to the important effort without hindrance. Kindly ignore anything contrary. ”