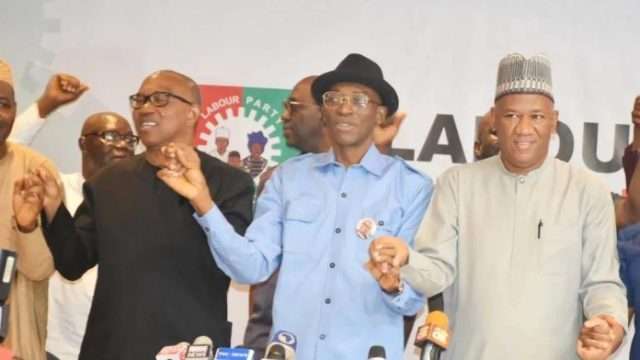 The Labour Party (LP) has released an updated list of 1,453 members, as its final Presidential Campaign Council (PCC) list for the 2023 general election.

The party had earlier released a 1,234-member Campaign Council list, which was later retracted after receiving backlash asking the removal of retired Army General John Enenche from the list who has been tagged as anti-Endsars movement.

Barely twenty-four hours after the release of the 1,234-member list, supporters of the party presidential candidate, Peter Obi have criticised the inclusion of a retired Army General John Enenche.

Enenche, a former director of information who made the 1,234-man Obi-Datti campaign team from the North-Central, claimed the killings of #EndSARS protesters in 2020 at Lekki Toll Gate, Lagos was false.

The National Chairman of LP, Julius Abure, at a news conference in Abuja on Wednesday, October 26, 2022, said the first list was retracted in order to capture all interests which have been covered in the new list .

Mr Abure said the Director-General of the Presidential Campaign Council remained Doyin Okupe, while retired Assistant Inspector-General of Police, Mohammed Zarewa, would serve as the chairman.

“You will recall that on October 12, we presented the Campaign Council list. Obviously, there were some errors, some misplacements and we had general complaints about the list.

“As a party that is democratic, that is a listening party, we decided to take all these grievances into account and we then promised that we are going to review the list to update it to accommodate other interests.

“We have been working on the list and I am highly elated today to announce to you that we have received the list and that is the list we are presenting today .

“We are presenting the presidential council list as well as the committee and it is also pertinent to put on record that it is not possible to accommodate every interest,” he said.

Mr. Abure appealed to all LP supporters and all those who have been working for the party that the list was unable to accommodate to continue to do their work and continue to support the party.

According to him, what is most important is for all to focus on the election and be able to deliver all candidates of the party, including the presidential candidate.

“It is also pertinent to announce that the campaign council and the committees will be inaugurated on Friday, October 28, then our Campaign will kick off in Lafia in Nassarawa state on Saturday, October 29.

“I want to appreciate all our candidates who have been working tirelessly to establish the party. This call, like we have always maintained, is a patriotic duty that history has entrusted on us at this time,” he said.

Mr Abure said the aim was for all to come together to solve the leadership problem of the nation by working to enthrone a patriotic ,visionary and proactive leadership and every other thing would follow to reposition the country for greatness.

He expressed optimistism and confidence that the PCC no doubt would lead the presidential campaigns and Nigerians would support LP programmes and the men of integrity being paraded to wn the election.

Mr Ojukwu, the secretary general of the council, commended Nigerians for their support for the party.

“Your interest in the affairs of our great party and your desire to ensure that our presidential candidate becomes the next democratically elected president of the Federal Republic of Nigeria saw you speaking out on the list published.

”Fellow compatriots, it is in keeping with our promise to look into your candid observations following the publication of the list of members of our great party’s presidential campaign council that we have studiously reviewed and updated the list which we present to you today,” he said.

Mr Ojukwu said that the party encouraged all to continue to work assiduously at their various goups, wards, LGAs, senatorial districts, and states including the Diaspora to ensure victory for the party at the pools in the 2023 presidential election.

He said the LP remained grateful to all members of the party, members of the presidential campaign council, volunteers, and sympathisers for their nterest and commitment