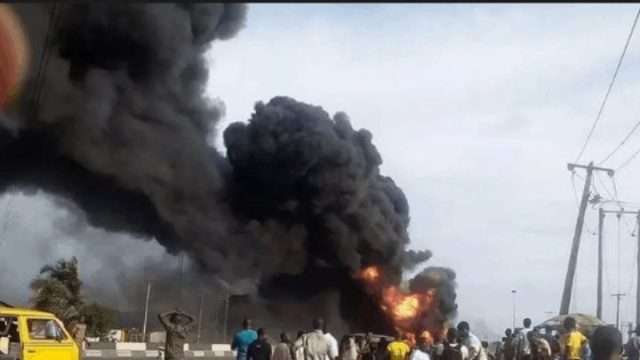 There was a serious tension in Niger State when a local tea seller has inadvertently caused an explosion of fuel tankers while trying to heat some water to make tea for his customers.

The fuel tankers burst into flame at about 7:00 am on Saturday in Badegi town around Badegi- Bida road in Katcha Local Government Area of the state.

The roadside tea seller was said to have gone to light firewood in order to warm the water pot he had put on fire, near one of the fuel tankers parked near his shop, but it was allegedly unknown to him that a fuel-laden tanker was leaking when he was trying to set up his firewood, during which time the vehicle exploded and burst into flames.

The Director General, Niger State Emergency Management Agency (NSEMA), Malam Ahmed Ibrahim Inga, stated this in an interview with Tribune Online by telephone on Saturday in Minna, the state capital, saying, “the fire was caused by a local tea seller who wanted to light his firewood to warm the water for his customers in order to make tea for them, but unknown to him, a tanker lorry nearby was loaded with Premium Motor Spirit (PMS), was leaking.

The NSEMA boss stated further that five loaded tankers also burst into flames while the tea seller who got injured was quickly rushed to Federal Medical Centre (FMC) Bida for medical treatment by some sympathisers near the scene of the explosion.

Inga, however stated that no residential buildings or commercial outlets were burnt, and no life was lost to the unfortunate incident.

He said, “my agency is in contact with our desk officer at the local government area, who in collaboration with other officials are presently handling the situation.”