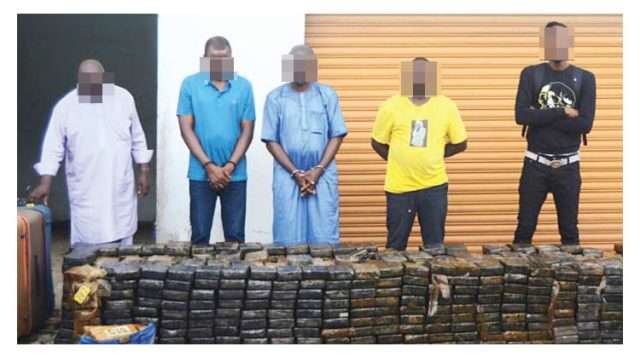 The National Drug Law Enforcement Agency on Monday busted a major warehouse where 1.8tons of illicit drugs worth over $278, 250,000, an equivalent of about N194, 775,000,000 in street value were seized in a secluded estate in the Ikorodu area of Lagos State.

The NDLEA’s Director of Media and Advocacy, Femi Babafemi, in a statement on Monday, said at least four drug barons including a Jamaican and the warehouse manager were arrested in the well coordinated and intelligence led operation that lasted two days across different locations in the state.

Kingpins of the cocaine cartel now in custody include Messrs Soji Jibril, 69, an indigene of Ibadan, Oyo State; Emmanuel Chukwu, 65, who hails from Ekwulobia, Anambra State; Wasiu Akinade, 53, from Ibadan, Oyo State; Sunday Oguntelure, 53, from Okitipupa, Ondo State, and Kelvin Smith, 42, a native of Kingston, Jamaica. Babafemi said, “They are all members of an international drug syndicate that the agency has been trailing since 2018.

Located at number 6 Olukuola crescent, Solebo Estate, Ikorodu, the warehouse was raided on Sunday, September 18, 2022, while the barons were picked from hotels and their hideouts in different parts of Lagos between Sunday night and Monday, September 19.

“Preliminary investigation reveals the class A drugs were warehoused in the residential estate from where the cartel was trying to sell them to buyers in Europe, Asia and other parts of the world. They were stored in 10 travel bags and 13 drums.”

In another development, the NDLEA also confirmed the arrest of 11 suspects for possession of drugs, guns and cartridges in various states in the country. Babafemi, in another statement on Sunday, said the operatives of the NDLEA while on patrol along the Okene-Abuja expressway, on Saturday, intercepted a J5 vehicle coming from Onitsha en-route Zaria, Kaduna State, with 18 pieces of pump action rifles and 1,300 cartridges.

The spokesperson for the agency said the two suspects conveying the arms and ammunition, Chukwudi Aronu, 51, and Shuaibu Gambo, 23, were arrested, adding that another suspect, Anthony Agada, 37, conveying 1,000 cartridges, was also nabbed in a bus coming from Onitsha to Abuja on the same day.

He said, “1,404 bottles of codeine syrup and 2,040 ampoules of pentazocine injection were seized from another vehicle coming from Onitsha en-route Sokoto, with the receiver, Stanley Raymond, 39, and the sender, Shadrack Ifediora, 46, arrested in follow up operations in Sokoto and Anambra States respectively.”