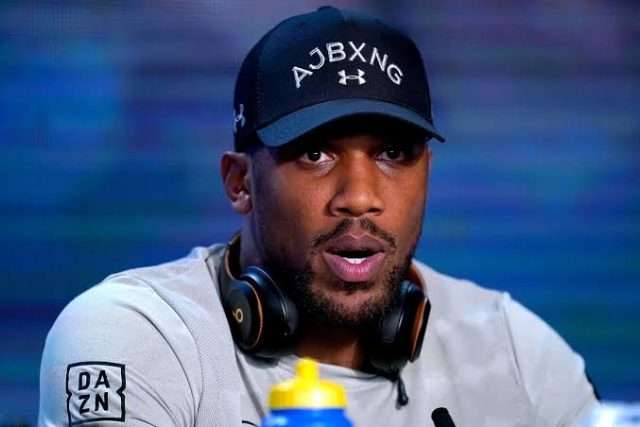 Many news outlets had earlier reported that the versus Joshua deal was dead, according to the Matchroom Boxing head’s logic.

Hearn had stated there was no chance Joshua would put pen to paper today. Secondly, his confirmation came after Fury said the fight is off if the deal isn’t signed within 24 hours.

If AJ followed Hearn, the British showdown would be dead in the water. As it turns out, Joshua is more optimistic than Hearn.

The former two-time world champion is hopeful of getting the battle of the UK’s two best heavyweights over the line before Fury’s cut-off point.

“I’ve been signing contracts for years. It’s not in my hands. It’s with the legal team,” explained Joshua.

“That’s why you hire lawyers. If you know the history of boxing, make sure you get your legal terms right.

“That’s why you got good managers and good lawyers. So, of course, I’m going to sign the contract.

“It’s just with some lawyers at the minute,” he added.

Joshua had verbally agreed on all stipulations until the contract arrived, and Hearn wasn’t happy.

“No. It’s not signed yet. We’re waiting for them to come back to us. But I don’t see any reason why it shouldn’t be signed,” Warren told talkSPORT.

“The big problem was when the fight would take place. It’s December [at the Principality Stadium in Cardiff].

“To give everybody comfort, we’ve even said that they can be involved in all the broadcast contracts, sponsorships, and everything.

“So they can see that everything’s above board.”

However, Sky Sports pundit, Johnny Nelson, who is not involved in Fury versus Joshua whatsoever, aired his views.

“I’m not confident, if I’m honest. My feeling is we have heard it from both fighters now. We have heard things from both camps,” he told Metro.

“Tyson put the offer out there, we don’t know whether it was a bluff or not, and Anthony Joshua took it. They have agreed to it.

“It could be petty stuff like ticket allocation, whose name is first. Who is allowed to post what on social media – that petty stuff?

“And when it comes to that sort of stuff, these can be deal breakers.”

If confirmed with Fury’s team, the fight will be Joshua’s 13th straight world heavyweight title bout as AJ challenges his fellow Brit for the WBC belt for the first time.

Former world champion, Joshua, has held the WBA, WBO, and IBF in his past reigns. He lost those belts to Oleksandr Usyk last month in Saudi Arabia.

Lineal Anthony Joshua
The lineal tag held by “The Gypsy King” will also be up for grabs at the fight Dec 3.

If Joshua wins, a second “Battle of Britain” fight could occur at Wembley next June or July.