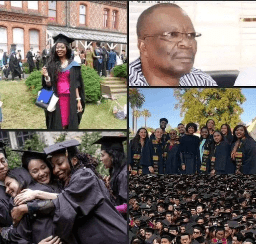 Thousands of Nigerian students remain stranded due to an ongoing feud between the Federal Government and the Academic Staff Union of Universities (ASUU) which forced shut public universities in the country since February 14.

However, speculations emerged on Thursday that the daughter of the current President of the union, Prof Emmanuel Osodeke recently graduated from the University of Chicago in the United States of  America (USA).

The speculation emanated from a Facebook post published by one Ekiti Princess, who alleged that Julianah Chedera Victor Osodeke, supposedly a 21-year-old daughter of the ASUU President recently bagged a degree from the foreign university.

Her post read: “FELICITATIONS: On behalf of my two daughters, who are part of the 5Million Nigeria University Students, let me congratulate Miss (21) Julianah Chidera Osodeke, the beautiful daughter of Comrade Dr Emmanuel Osodeke, who recently graduated from The University of Chicago, Illinois US. We want to thank God and appreciate your daddy for his efforts at sending you to the United State for speedy completion of your course of study.

“We equally use this opportunity to thank your Dad for his efforts and ruggedness on the ongoing ASUU National strike especially for keeping us at home with our parents for the last seven months for obvious reasons (salary increase). We appreciate you, sir. May the Lord reward you accordingly”.

The post which was published at 8:16 pm Nigerian time has already been shared over 230 times at the time of filing this report and attracted several comments and impressions. Many netizens criticised Prof Osodeke for shutting down public universities and plunging many students into a state of uncertainty about their future, while his daughter enjoyed uninterrupted education abroad.

HOW TRUE IS THIS CLAIM?

Investigations by our source, (TNG) showed that the photos used for the picture collage that accompanied the post were sourced from different sites.

The first single photo of the graduating student, purported to be Juilanah, is that of another Nigerian, Anita Osariemen Omonuwa, from Edo-state, who became the first black woman to graduate from the University of Reading in the UK with a first-class degree.

The photo matched another photo on myschoolgist.com where the story about Anita was published in 2014. She also bagged two other first-class degrees from the University of Birmingham, UK (LLM), and the Nigerian Law School (BL).

Another photo in the collage, to the bottom left, was also spotted on the Obama Foundation Scholars website and further checks revealed that the 536th Convocation of the University of Chicago during which degrees were officially conferred to all graduates, was held about three months ago on June 4.

In addition, at least two sources close to the Osodeke family have confirmed to TheNewsGuru.com that the ASUU President has only male children.

VERDICT: Findings from investigations carried out by our source show that the claim that Prof Emmanuel Osodeke’s daughter recently graduated from a US university is FALSE and should, therefore, be disregarded by the public