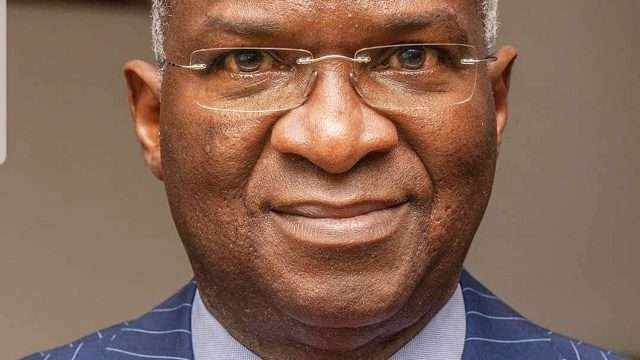 Minister of Works and Housing, Babatunde Fashola, has said elections can be won without exaggerating Nigeria’s problems.

He made submission during the yearly lecture of The Niche with the theme, ‘2023 elections and the future of Nigeria’s democracy, yesterday in Lagos.The minister said: “We can win elections without exaggerating our problems. We can do so by offering credible services and well-thought-out solutions.“

We can win elections without disrobing our country before the global community. We can do so by valourising Nigeria’s possibilities and not by widening her fault lines.

“Elections and democracy must represent for us a feast of ideas and choices that bring out the best of us and the best of our country.”Fashola noted that the people to be voted for during the 2023 elections would determine the country’s progress.

He added that rather than focusing on the presidential election, Nigerians should also divert their attention to elections at their local councils, Local Council Development Areas (LCDAs) and state Houses of AssemblyThe Lagos State ex-governor went on: “Our democracy in 2023 requires us to focus on the kind of people we will elect to local, state and federal constituencies because it is those people who will determine many things that will affect us.

“The local elections, to elect people to serve in the local governments, as state legislators and as governors are extremely important to our quality of life and deserve that we pay the utmost attention to them without losing sight of the federal elections.”

The minister continued: “Therefore, I fail to understand why a party that has a legislative majority is accused without more, of being a rubber stamp. They are not elected to fight the executive, especially of their party, and they are expected to use their majority to push their party and government agenda through,“That is why elective seats are hotly contested and won.

But I find it even stranger and inexplicable that a party that has won legislative majority then literally surrenders its mandate in the parliament by handing over not just committee chairmanship seats to the minority, but also committees that are critical in the party’s agenda.

”In his address, veteran First Republic politician and former Liaison Officer to the late President Shehu Shagari, Alhaji Tanko Yakasai, said the country is at crossroads, canvassing adoption of the French presidential system.“

Nigeria is currently at crossroads and the current democratic government has only succeeded in creating a generation of oligarchs and political entrepreneurs running the country as a private undertaking, and not a federation responsible for the wellbeing of the people.

“For this, I advocate for people-oriented change and peaceful restructuring of the current federal system to devolve power and responsibilities to the sub-nationals which would, in turn, offer a better opportunity for stability and unity.”

Funke Treasure, who represented The Guardian Editor-in-Chief/Managing Director, Martin Oloja, said transactional democracy (vote buying) during the forthcoming elections is a No-no, clarifying: “This is because we have seen enough, we have endured enough and we have suffered enough.”