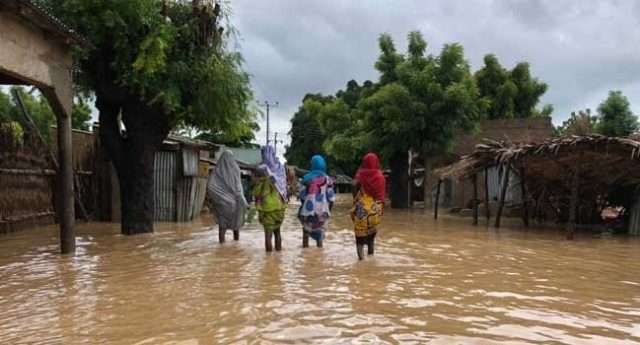 Authorities in Jigawa have reported six more deaths as a result of the floods that have continued to wreak havoc on communities in the north-western state.

This comes barely three days after police authorities in Jigawa said 29 other people lost their lives to flood-related incidents. As of Tuesday, the state has lost 98 residents to the ravaging floods.

The Chairman of Jigawa State Emergency Management Agency (SEMA), Sani Babura, who confirmed the six new deaths lamented that flooding in the state has reached an alarming stage.

He stated that the number of communities affected by the floods was increasing every day, a development he said has made the situation more aggravated.

Sani linked the deaths to floods, rainstorms, and lightning, adding that at least 57,000 have been affected so far.

According to him, more than 100,000 have been forced out of their homes and some of them are living within the 49 camps established by the state government to provide shelter for displaced people.

“With regards to the farmlands, roads, and other infrastructure destroyed by the flooding, an assessment is ongoing and the statistics will be released, but the damage is enormous,” the SEMA boss said.

He, however, gave an assurance that the agency was working 24 hours in collaboration with the National Emergency Management Agency (NEMA) and other partners to support the victims.At least 83 people, including children and women, have lost their lives to flood-related incidents in the state since the beginning of August.

The floods also took a toll on infrastructure in the state as some roads were cut off as a result of erosion, forcing locals to seek alternative routes to their destinations.Recently, the Nigeria Hydrological Services Agency (NIHSA) confirmed Jigawa as the worst-hit state by the floods ravaging parts of the country.

It said 16 local government areas of the state were affected and more than 72 people have died with property, livelihoods, and infrastructure damaged as of September 7.the NIHSA has appealed to authorities in various states and the Federal Capital Territory (FCT) to take necessary measures to prevent the ugly flooding menace of the past years.Nigeria, according to it, is now in the peak of flooding season and there is a need for the government, especially at the state and local government levels to intensify and set up efforts to avert related disasters in their domains.

The agency stated that almost all 36 states and the FCT have experienced one form of flooding or another, and warned that the rivers Niger and Benue system have started building up as Nigeria is located at the lowest point of the River Niger Basin occupied by nine countries.

Specifically, it asked authorities in the 13 states that fall on the main course of rivers Niger and Benue system to put in place adequate measures and enhanced preparedness to mitigate any eventual flooding and accompanying disasters.