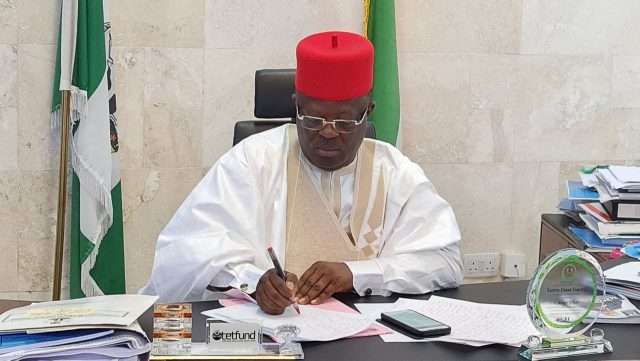 The Ebonyi State governor, Dave Umahi, yesterday, predicted victory for the All Progressives Congress (APC) in the 2023 Presidential election.

The Governor who spoke to newsmen after he met with President Muhammadu Buhari at the Presidential Villa, Abuja, however, picked the candidate of the Labour Party, Peter Obi as his second favourite.

He said he was in the State House to invite President Buhari to commission the new Ebonyi State Governor’s Lodge, recently completed by his administration.

Umahi, who fielded a question about his earlier reservations after his loss at the APC presidential primaries and his demand for a president of Southeast extraction in 2023, also said the current political movement projecting Peter Obi would go a long way to prepare the ground for the realisation of an Igbo president in the future.

The governor who maintained that the presidential contest in 2023 should be an all-South affair, said he has been fascinated by the momentum created by the Peter Obi movement, because that is awakening an awareness about the people of the Southeast and their political relevance.

“What happened during the primaries of PDP and APC were a kind of miscalculation by our people, but to say whether they’re ready for the presidency of the country anytime, I think that the movement of Peter Obi is an eye opener and that’s why I said I love what he’s doing. I’m encouraged by what he’s doing because if he’s not doing what he’s doing, it means that Southeast would have been forgotten. “

So, while my party takes the victory, he would have prepared a very good ground for the Southeast presidency, so that nobody is going to write us off and you can see the level of his acceptability, which does not translate to victory over APC, I’m sure of that. But it’s a good movement and it reassures the Southeast people and the entire country that we’re accepted and that we’ll become the President of this country.

It’s very important.“Peter Obi’s movement, and all the movements, are anchored on God’s will, it’s only God who knows who will win, but there must be a wish. As a party man, I would wish that our party wins and if God says no, the next person I’ll wish that should win is Peter Obi, because I believe strongly, and I will say it anywhere, in this north/south presidency.

“After the North has taken eight years, there is no moral justification to be seeking to take another eight years; it should go to the South. So, I’m not wishing Peter Obi away. God has the final say and He has the power and gives to whomever He wishes,” he said.

Umahi also sought to correct the public narrative of violence, which, until recently, was prevalent in the Southeast, adding that the development was simmering, because of the prospect of a Peter Obi winning the election in 2023.He said that security was now gradually returning to the region because of the successes so far being recorded nationwide.“

You cannot technically assign the killings to be because of Igbo presidency. You can see that security is improving generally in the country and it has nothing to do with the movement of Peter Obi. Peter Obi movement is a movement that anchored on equity, justice and fairness.

“It may not translate to outright win, because I must defend my party, I must wish my party well, and I’m having the ticket of my party. But whether what he’s doing has meaning, not only Southeast, it does have meaning. So, we must never attribute the killings in the Southeast to this kind of movement,” he said.On the chances of the APC in the Southeast in the next elections, the governor noted that the game would change, as different dynamics would play out to determine people’s interest, just as he predicted that Obi would get a substantial number of the votes in the region. “It’s going to be a different ballgame altogether, because when campaigns start, the interest of our people in terms of presidency is there, you can’t wish it away, but everyone in Southeast holding the ticket of their party, is going to be struggling and he’s going to be fighting. “You will not tell the guy that has the ticket of House of Assembly to look at the bigger picture of Igbo presidency; he may not see it. But that is not to say that Peter Obi is not going to get substantial votes in Southeast, it’s there.”

On the crises within the ruling APC and its likely impacts on the chances of the party in 2023, he said “I think we don’t have issues in APC like the kind of issues that are in the other parties. In a big house, there are vessels unto honour, another vessel unto dishonour.

Literally meaning that there must be some issues in a big house like APC, but the structure and the spread of APC is such that victory is assured. “I can assure you that some of the disagreements in some states are going to be resolved.

Mechanism have been put in place by Mr. President, the candidate of the party, his vice and the National Chairman and the leadership of the party, to sort out those differences and I think we are well prepared for victory in 2023,” he said.

Speaking about the relevance of the new governors’ lodge recently built by his administration, he said “I build mind-blowing projects to, first and foremost, let our brothers and sisters in the Southeast know Ebonyi State has come of age.

“So, I built that project for people like you, to assure you that we went to the same school, that we have the same brain and that we’ve come of age and that nobody should neglect Ebonyi State again. And to some people, we use it to punish them, those who neglect us are being punished by this gigantic project and my projects are projects you can’t find anywhere in Southeast. You can crosscheck that. So, it’s for punishment.“

The benefit is to instill confidence in our people, to make our people number one in everything we do.

Okay? That’s why when you are going to marry, you don’t wear tattered dress, and you ask yourself, what is the economic benefit of the beautiful dress you are putting on? It’s to instill confidence and make your bride to accept,” he said.