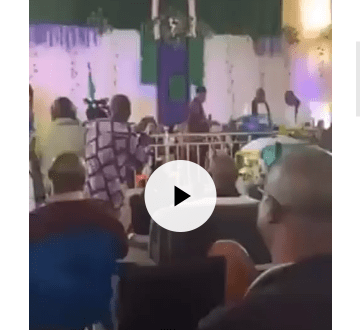 Social media has gone agog over a viral video showing the national chairman of the All Progressives Congress (APC), Senator Abdullahi Adamu attending a church in Nasarawa state on Wednesday.

Nigerian youths have been debating on the internet that the motive was for him and his political party to gain Christians in support of a Muslim-Muslim ticket.

Adamu was at the Evangelical Church Winning All (ECWA) church in Awayi, Nasarawa state to grace the funeral ceremony of the late monarch, HRH Aren Eggon, Bala Angbazo.

The monarch was born in Wakama District of Nasarawa-Eggon Local Council in 1933 and ascended the throne on July 11, 1981.

While addressing congregants at his funeral service, Adamu in a shot clip video was on the podium where clergymen sat, held a microphone and said, “Praise the Lord! Praise the Lord! Halleluyah! President of ECWA…”

A tweep, Adamu Mohammed @Mohammedpato1 claimed that the APC chair attended in the company of Nasarawa state governor, Abdullahi Sule.