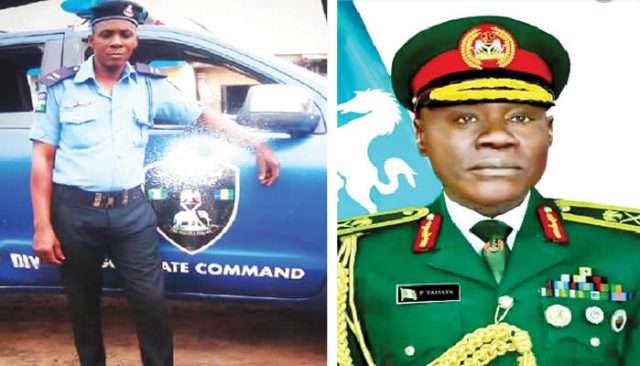 Lagos State Police Command has asked the Nigerian Army to fish out soldiers behind the torture and murder of Inspec­tor Monday Orukpe who was among the five policemen at­tacked for stopping vehicles along their lane to pave way for a heavy duty truck joining the expressway.

The command has also asked the Army to return two AK47 rifles and three magazines carted away by the soldiers while it awaiting the panel of inquiry set up by the Nigerian Army to investigate the immediate and remote causes of the incident.

In a statement signed by the Spokesperson for the La­gos State Police Command, SP Benjamin Hundeyin, the command stated that its atten­tion had been drawn to a re­port credited to Major General Umar Musa, outgoing GOC 81 Division, claiming that a ‘po­lice officer shot at the soldier during the altercation which clipped him in the ear but nar­rowly missed his vital parts.

He added that in as much as the command is in a grieving mood and has decided to toe the line of civility; it is pertinent to stand against misinformation.

Part of the statement reads, “The fact remains that on Wednesday, August 3, 2022, at the Trade Fair area of Lagos State, about thirty Privates of the Nigerian Army attacked five policemen for stopping ve­hicles along their lane to pave way for a heavy duty truck joining the expressway. After the soldiers had brutalised the ASP leading the team, taking his magazine, and abducting two Inspectors with their ri­fles, the next Inspector they attempted to attack fired a sin­gle shot into the air, an act that made the soldiers retreat.

“The single shot was into the air and at no point was anyone hit. The Lagos State Police Command challenges the Army authorities to pres­ent the soldier allegedly shot.

“While we mourn our fallen hero, and pray for the total re­covery of the second abducted Inspector, we urge Nigerians to disregard the claim that a soldier was shot as there is ab­solutely no truth to it.

“Meanwhile, the Lagos State Police Command eagerly a waits the report of the panel of inqui­ry set up by the Nigerian Army to investigate the immediate and remote cause of the inci­dent. The Command equally looks forward to the fishing out of the soldiers behind the tor­ture and murder of Inspector Monday Orukpe; and the return of two AK47 rifles and three magazines carted away by the soldiers, in line with the pledge made by the Nigerian Army as conveyed by Brigadier-General KN Nwoko during a condolence visit to the Commissioner of Po­lice, Lagos State Command, CP Abiodun Alabi