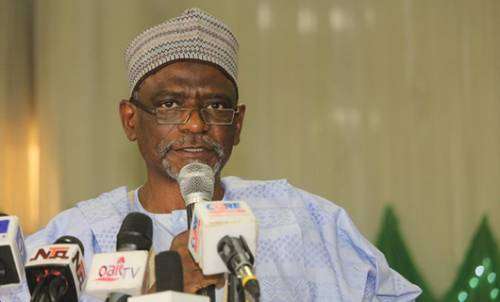 The Minister of Education, Adamu Adamu, says the Federal Government has insisted on implementing its ‘no work no pay rule’ on the Academic Staff Union of Universities, ASUU, to serve as deterrence to other unions who might embark on strike action in future.

Mr Adamu, who revealed this at the weekly briefing organised by the Presidential Communications Team, said ASUU insisted that its members must be paid for the period of the strike.

According to him, the insistence by ASUU on being paid six months’ salaries of the strike period is what is stalling the negotiations between the Federal Government and the union.

”If you think it is for the government other than what the government is doing in the university to stop strike, the standard government has taken now is not to pay the months in which no work was done.

”I think this is the only thing that is in the hands of government to ensure that there is penalty for some behaviour like this.

”So, I believe teachers will think twice before they join strike if they know that at the end they are not going to be paid and the federal government is not acting arbitrarily.

”Before, it was some magnanimity on its part, there is a law which says if there is no work, there will be no pay.
”I believe this will be a very strong element that will be determining from going on strike,” he said.

Mr Adamu also expressed the hope that all other unions like Senior Staff Association of Nigerian Universities, SANNU, Non-Academic Staff Union of Education and Associated Institutions, NASU, and the National Association of Academic Technologists, NAAT, will resume work in the next one week.

The minister also dismissed media report that the president gave him two-week ultimatum to resolve the misunderstanding between ASUU and the Federal Government.

The minister further disclosed that the Federal Government had spent over N6 trillion on revamping the country’s education sector in the last seven years.

He said the money was spent on the provision of infrastructure and Information Communication Technology equipment to public institutions of learning across the country.

“The implementation of the sector’s blueprint is on course.

“Steps are also being taken to accelerate the implementation of the 2020 presidential approval for the revitalisation of the teaching profession.

“The government of President Buhari has expended a total of N6, 300, 947, 848, 237 on capital and recurrent expenditure in the education sector in the last seven years,” he said.

The minister pledged that the government would continue to improve on the implementation of its strategic plans as well as create the necessary environment for the overall development of the education sector in Nigeria.

Mr Adamu announced that all states of the federation could now boast of at least a federal university and polytechnic in each of them.

“This administration has ensured that all states of the federation now have a federal university and a federal polytechnic, with nine universities, nine polytechnics and six colleges of education established between 2018 and today.

“This administration is determined to ensure that they take off very well that is why provisions have been made for all of them,’’ he said.

The minister highlighted that the basic and secondary level of education had also received attention for the current administration, with about N553 billion spent in the process.

“When we look at basic and secondary education, the ministry has invested heavily in the construction, renovation and rehabilitation of classrooms, hostels and laboratories as well as some other issues like security and other infrastructural facilities at the basic and secondary levels.

He lamented that the emergence of COVID-19 affected the timing of final examinations for secondary school leavers.

He, however, assured that everything would go back to normal from next academic session.

“In an effort to correct the distortions, we had to reschedule our National Examinations which have already been taken.

“I am glad to announce that we will resume our normal examination schedules in the next academic session. Nigeria is the first country in the West African Region to achieve this and other countries are copying our model,’’ he said.

On whether the Nigerian students deserve compensation from the Federal Government for the time wasted from the six-month ASUU strike, Mr Adamu said it was duty bound on ASUU to compensate the affected students.

According to him, the Federal Government bears no liability to compensate the students grounded for six months over lost time, saying that if the students are determined to get compensated, they should take ASUU to court.

He, therefore, advised the affected students to “take ASUU to court” for damages incurred over strike period