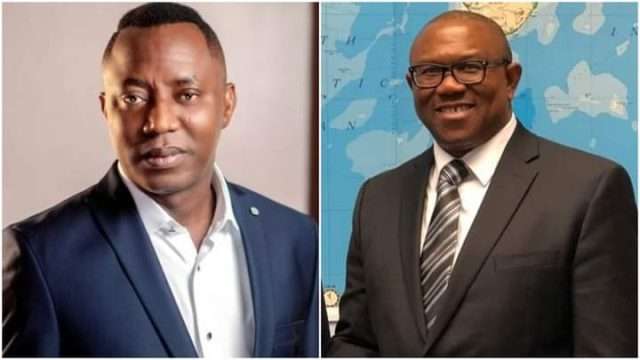 A former Chairman of the Labour Party, the Federal Capital Territory, Abuja chapter, Comrade Che Oyinatumba, has urged Nigerian workers and other citizens to support the presidential candidate of the African Action Congress, Omoyele Sowore, instead of the Labour Party flag bearer, Peter Obi, in the 2023 elections.

Oyinatumba, who confirmed his position to The Punch on Tuesday morning, in a telephone conversation, said he was standing by his words.

Meanwhile, in a viral video obtained by our source, Onyinatumba had said in a programme held last Friday in Abuja, in honour of a late veteran activist, Segun Sango, that people should “do what they are doing to support Obi for Sowore instead.”

“If we are saying it is the structure and getting the workers to mobilise and build Labour Party, we can do the same for Sowore who has a legal tendency to what we believe in than this capitalist called Peter Obi

He maintained that Obi would leave the Labour Party once he won the presidential election, adding that it was only easier to rally around Sowore than Obi.

“Now we can agree that if Obi wins this election, he would leave. It would be easier and more manageable for us to rally round a Sowore and his party, or bring him to the Labour Party and give him the structure,” Onyinatumba said.

“It is not true that the Nigerian Labour Congress is reclaiming the Labour Party,” he said, adding that the resolution of the NLC a few days ago did not moblise support for Obi, rather their Kebbi State governorship choice, an All Progressives Congress candidate, wondering why “the NLC would be supporting APC in Kebbi and asking other states to mobilise for Labour Party

Meanwhile, Obi is believed to have garnered much support mainly from South-East citizens, particularly on social media, with a very online-active layer, said by some to be “aggressive” supporters.

In a series of tweets posted to his verified Twitter page, @PeterObi, the former governor of Anambra State appealed to his supporters to learn from views different from theirs.

While acknowledging that “the frustration and anger in the country” could have been responsible for his followers’ intolerance of dissenting views, Obi appealed that the energy should be channelled positively.

He asked his supporters to express themselves with grace “so as not to precipitately shut doors to future collaborations and sustainable nation-building.”