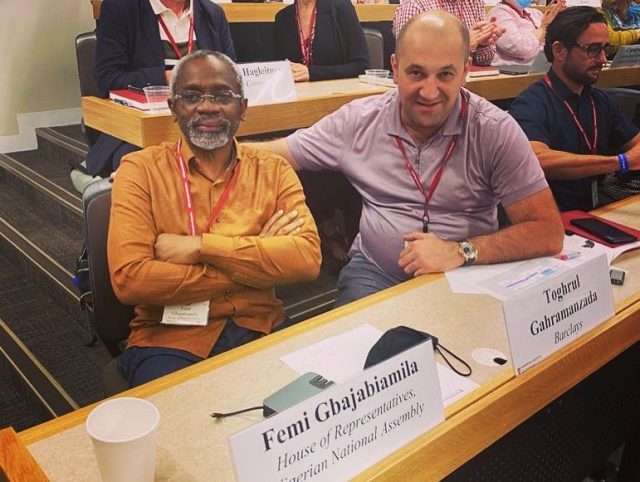 Following pictures posted on Twitter, some Nigerians on social media, Tuesday, conveyed displeasure over the resumption of the Speaker of the House of Representatives, Femi Gbajabiamila in a university in the United States of America amidst the continuing strike action by the Academic Staff Union of Universities.

ASUU had on February 14, 2022, declared the commencement of industrial action following the failure of the government to meet some lingering demands of the union.

Gbajabiamila had earlier on Tuesday tweeted via his verified Twitter handle, @femigbaja that he had gone back to the Harvard Kennedy School.

“Back to class. In a leadership course @havard @Kennedy_school. Forget the number of grey hairs, one is never too old to learn.”

Commenting on the development, a Twitter user, @FS_Yusuf_ tweeted, Oga, ASUU dey strike o. 15 million kids are out of school. Thousands of young people in Surulere are home and not going to school. Weldon

Another Twitter user, @Ambrosia_ijebu tweeted, Congrats. Did you tell your coursemates there that the government Universities in the country paying your school fees have all been shut down for nearly one academic session?

Another Twitter user, @olorunwababs tweeted, If universities in the USA were to be on strike, how will you be able to experience a working system? Walk around and see how basic things work in a normal university? Let’s hope you’ll return and use your influence to make our educational institutions work. #EndAsuuStrikeNow

Another Twitter user, @IamTheIroko who quoted the tweet says, “If they kept University lecturers at home for the past months over there would you be able to learn, broaden or sharpen your skills?”

The reports that under the term of Gbajabiamila as the speaker of the house of reps, ASUU embarked on strike for close to 12 months, nine months in 2020, and close to six months in 2022