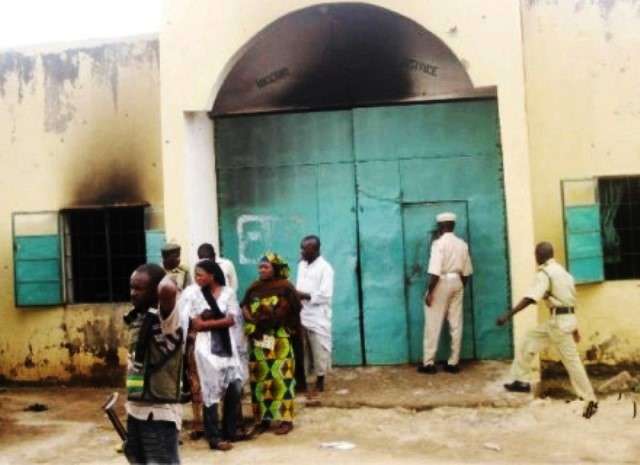 There was pandemonium among residents of the Kuje Prison area in Abuja on Tuesday evening, after gunmen suspected to be terrorists launched an attack on the prison in Abuja and freed over 600 inmates.

Not iDeemlawful, an earlier reports aired by some media claimed suspended Deputy Commissioner of Police, Abba Kyari, was among the inmates who escaped after the attack.

While Permanent Secretary of the Ministry of Interior, Dr Shuaib Belgore, said over 600 of the inmates fled the prison when it came under attack, insider who spoke to our source under the condition of anonymity revealed that over 1,000 inmates escaped.

Belgore opined that those behind the attack were Boko Haram terrorists, who came specifically for their members held in custody.

He, however, said about 300 had been recaptured, while 300 were still at large

Speaking on the incident, A Vanguard source disclosed that Kyari was not missing.

His words: “Abba Kyari is not missing. The total population of the Kuje Prison inmates is about 1,476, and only 111 of the inmates refused to escape and decided to remain in the prison as 90 percent of the inmates escaped.

Those that decided not to escape included former Governor Jolly Nyame of Taraba state, Farouk lawal, Abba Kyari and four of his officers: Retired AVM and also 107 other inmates whose jail term is less than three months remaining and some who are innocent of what they were accused of.

“There are also a few other good Senior Citizens.

“Any other press release that tells you there are more than 111 inmates in Kuje Prison today is completely false. All persons that volunteered to remain behind were counted by 2a.m. today and the total is 111 persons.

“Expect the usual false press releases this morning from the security agencies trying to defend themselves and mislead Nigerians and the President.

“Don’t believe any of the security agencies that will start misleading the public with false press release that it was ‘attempted jailbreak, terrorist were repelled, prisoners were re-arrested’.

“All are false press releases as usual to mislead Nigerians and the President to show that these Major security agencies are working when they don’t have any capacity as they couldn’t detect or prevent these type of massive attack and many others that happened in the recent past.

“The National Assembly or the Presidency should send a strong delegation to come and count the people remaining in Kuje Prison now, which is less than 10 percent as over 90 percent of the prisoners have escaped.

“The security architecture of Nigeria needs a major overhaul.

“How can over 300 terrorists plan big operations like this and attack a prison facility inside Abuja, the Federal Capital Territory and escape successfully with over 1,300 prisoners without security agencies getting intelligence before the attack or even preventing the attack when it came?

“This operation was executed by over 300 terrorists shouting Allahu Akbar, and it lasted for two hours and 45 minutes and the reinforcement of men and equipment came more than one hour after the terrorists have gone.

“That is about four hours after the operation started.”