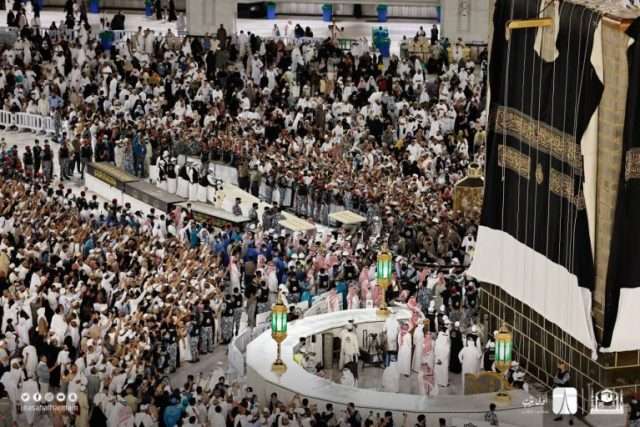 The Holy House, Kaaba in Makkah, Saudi Arabia, is now wearing a new look. Amid euphoria of joy, carnival-like ambience laced with solemn prayers and praises of Allah by pilgrims, who were present at the holy house, (Harram) the Kaaba was dressed early Saturday morning.

The process, which started after Ishai (night prayer) was concluded 3a.m., marking the first of Muharram 1444 A.H.

Meanwhile, the tightening of the belt around the corners and the door still continue as at the time of writing this report.

It was gathered that the super embroidery cloth, kiswah which was brought into the Harram by a long motorcade with hundreds of security officials weighs 850 kilogrammes and cost a whopping SR25 million, translating to $6.5 million, making it the world’s most expensive covering.

This is the first time the Kiswa, as it is called, was changed on the first day of the new Islamic year.

Before now, it was always changed during Hajj, specifically on the morning of Dhul Hijjah 9 after the pilgrims go to Mount Arafat, in preparation for receiving worshippers the next morning, which coincides with Eid Al-Adha.

Recently, the Saudi Arabia’s General Presidency for the Two Holy Mosques led by Sheikh Abdul Rahman Al-Sudais announced the change in tradition and fixed the eve of Muharram 1, the first day in the Hijri calendar.

Sheik Al-Sudais explained that the change was being made based on a royal decision.

According to the Saudi Press Agency, the changing of the Kiswa early Saturday was carried out by a team of 200 Saudi technicians from the King Abdulaziz Complex for Manufacturing the Kaaba’s Kiswa, under the supervision of Sheikh Sudais.

How Kaaba was dressed

The new Kiswa consisted of four separate sides and the door curtain was installed. Each of the four sides of the Kaaba was raised separately to the top of the Kaaba in preparation for its unfolding on the old side, and fixing the side from above by tying it down and dropping the other end of the side, after the ropes of the old side were loosened.

By moving the new side up and down in a permanent movement, then the old side fell from below and the new side remained, and the process was repeated four times for each side until the dress was completed, then the belt was weighed in a straight line to the four sides by stitching it.

Every year, technicians at the King Abdulaziz Complex do the weaving, stitching and printing by hand and machines using 47 pieces of cloth and thread to make the Kiswa.

The world’s largest computerized sewing machine, at 16 meters in length, carries out the process.

The cloth is stitched together in five different parts and fixed to the base with copper rings. Around 670 kilograms of raw silk is dyed black at the complex. It also has 12 lamps at the bottom of the belt.

The Kiswa is decorated with Quranic verses embroidered onto the cloth with 120 kilograms of 21-karat gold thread and 100 kilograms of silver thread.

The cost of making a new 850-kilogram Kiswa is estimated to cost SR25 million, or over $6.5 million, making it the world’s most expensive covering.

It was gathered that there is always a daily follow ups by a team of specialists who would monitor the stability and condition of the cloth, providing it with immediate maintenance if needed throughout the year