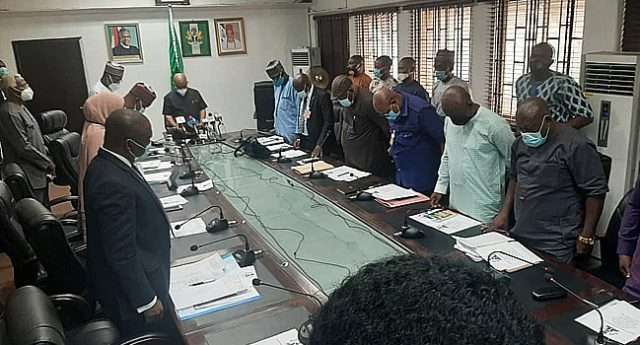 The crisis in the nation’s public university system has taken a new twist as members of the Senior Staff Association of Universities (SSANU) and the Non-Academic Staff Union of Universities (NASU) rejected the report of the Professor Nimi Briggs-led renegotiation committee.

Both unions insisted that they would not be bound by the recommendations of the committee which was set up by the Federal Government to end all strikes across the nation’s universities.

NASU General Secretary, Peters Adeyemi, and SSANU National President, Mohammed Ibrahim, made the position of the unions known on Friday at a joint press conference in Abuja.

They said they never concluded negotiations with the committee before it submitted its recommendations to the government for implementation, stressing that such an action was a betrayal.

In a bid to resolve the crisis in the university sector, the Federal Government in March constituted a committee headed by Professor Briggs to negotiate with NASU and SSANU, as well as the Academic Staff Union of Universities (ASUU).

ASUU had grounded academic activities in public universities since February 14 when the lecturers embarked on strike, a situation that became complicated when NASU and SSANU also downed tools in April.

Read the full text of the press conference by the Joint Action Committee (JAC) of NASU and SSANU below:

This address is coming on the heels of the recent revelations and development arising from the ongoing national strike embarked upon by the various university-based unions. The revelations leave a sour taste in the mouth and given the incendiary and combustible excitement and tensions which the developments have generated amongst our members, we feel compelled to make our position known on the status of our negotiations with the Federal Government on the ongoing industrial action.

You would recall that the Presidency convened a meeting on Thursday, 12″ May, 2022 tagged “tripartite plus” where certain resolutions were reached on the following salient issues:

Renegotiation of the FGN/2009 Agreements signed with the University-Based Unions; and

Integrity tests for the proposed payment platforms from ASUU, the JAC of NASU and SSANU and the existing platform of IPPIS by the National Information Technology Development Agency (NITDA).

It is expedient at this point, to report to the public what has transpired in respect of these two issues and the resolutions of the JAC of NASU and SSANU arising therefrom.

THE RENEGOTIATIONS OF THE FGN 2009 AGREEMENTS WITH NASU AND SSANU

In line with the terms of the Agreements reached with the two unions, the Year 2009 Agreements were supposed to have been reviewed after three years. Following agitations and industrial actions demanding a review of the agreements, it was only until 2018 that the Federal Government set up the Dr Wale Babalakin (SAN) Committee to negotiate with the unions with a view to reviewing the agreements. The Babalakin Committee took off and was meeting with the various university to be very unfortunate and a betrayal of confidence by the Committee. While it may be easy to dismiss this information as a mere rumour, our belief is confirmed by the fact that a report was truly submitted to the Federal Government.

The Honourable Minister of Labour and Employment in his various statements had exposed the fact that a report had been prepared and presented to the Federal Government by the Briggs Committee. The Committee which had clear Terms of Reference to renegotiate with the University-Based Unions, chose to solely review the salary and submit its report on the strength of its conclusion, surreptitiously allocating a salary increment to the two Unions even without having a single discussion on the issue with them. This is tantamount to shaving a man’s head behind his back. This is an utmost breach of faith and infringement of collective bargaining processes.

On the recent directive by the President to the Honourable Minister of Education to take over negotiations with the aggrieved Unions, we wish to point out that this is a welcome development, hoping that the Federal Ministry of Education will correct the anomalies.

While we place on record, our appreciation and commendation to the Honourable Minister of Labour and Employment and his team, for always filling the gap and making efforts to intercept industrial disputes, it should also be placed on record that the Federal Ministry of Education had in the past absented itself from such meetings leading to poor follow-up action on the various Memoranda of Agreements signed.

These absences of our employers have been a major albatross to all Memoranda of Action or Agreements as the case may be. It is to the commendation of the current Permanent Secretary of the Federal Ministry of Education, that since he assumed that office, the Ministry has been markedly more responsive to matters affecting the Unions.

We commend the National Information Technology Development Agency (NITDA) for the painstaking labour in undertaking the assignments so far. The deliberations at NITDA on the test cases of the three-payment platform-IPPIS, UTAS and U3PS-based Unions concurrently. The meetings with the Babalakin Committee were exhaustive and deliberations were robust in terms of what real negotiations should be.

The Unions, NASU and SSANU had made significant progress with respect to the issues being negotiated before the life of the Babalakin Committee was cut short in 2020. Following the disbandment of the Babalakin-led Committee, the Federal Government reconstituted the Committee this time around, led by Professor Munzaili Jibril.

The Munzali Jibril Committee commenced its assignment in 2020 and for over one year that the Committee sat, it never invited the Non-Teaching Unions for any meeting. Unlike the Babalakin Committee which had meetings with the four University based Unions concurrently, the Munzali Jibril Committee, upon our enquiry, maintained that their modus operandi was to conclude negotiations with one union and move on to another.

Until the Committee was again disbanded, it never had meetings with the NASU or SSANU negotiation teams. After the disbandment of the Munzali Committee, another Committee under the leadership of Professor Nimi Briggs was constituted in March 2022. The Briggs Committee was given three months to conclude its negotiations with the University based unions which would effectively mean that its assignment ought to have ended by June 2022.

It needs to be pointed out that at the two meetings held with the Briggs Committee by both Unions, there were no deliberations on salary increment and allowances. While the NASU and SSANU teams had presented a Memorandum of Demands that included a proposal for salary review along with appropriate salary tables, the Committee had pleaded that the two unions should take the issue of review of salaries and allowances last, because they were still interfacing with the relevant government agencies to give them appropriate offers to counter our proposals on salary review.

It is therefore shocking, to say the least, that while we have not even commenced discussions on salary review and other allowances, we received reports that the committee had gone ahead to submit a report to the Federal Government recommending a ten per cent (10%) increase for Non-Teaching Unions. This we find to have been transparent and open so far. We urge NITDA to accelerate the results processing and come up with its findings in order to lay to rest the contentious issues of a viable and enduring payment platform best suited for the Nigerian University system.

Ladies and gentlemen, today marks the 117″ day of our national strike. It needs to be reiterated that it has never been the desire of NASU and SSANU to ground the system. We have however been compelled by the shabby treatment that we as workers have received in the University system.

As of today, out of the eight issues that led to the strike, none of them has been conclusively addressed by Government. Arrears of Consequential Adjustments on Minimum Wage have only been partially paid, as in many Universities, we still have many members who have not been paid, while the Federal Universities of Agriculture have been totally left out.

No Arrears of Earned Allowances has been paid. White Papers on Visitation Panels have not been released. Staff School teachers continue to languish despite a Court judgment in their favour. Our jobs continue to be usurped by Vice-Chancellors as jobs for the boys and allocated to Academic Staff. State Universities have been badly hit by poor funding, poor governance and non-payment of salaries to workers spanning months.

As JAC of NASU and SSANU, we are determined to change the status quo. We remain undaunted and undeterred in the face of our salaries that have been stopped and threats issued to the Unions from various quarters. We thank particularly, the Nigeria Labour Congress for its various interventions in ensuring the resolution of the matter.

We also thank the Nigerian media, students, parents and other stakeholders who have shown understanding in the face of the adversities which this industrial action has caused. We urge you all to continue to appeal to the Federal Government to do the needful so that we can effectively return to our offices and jobs.

Thank you for listening.