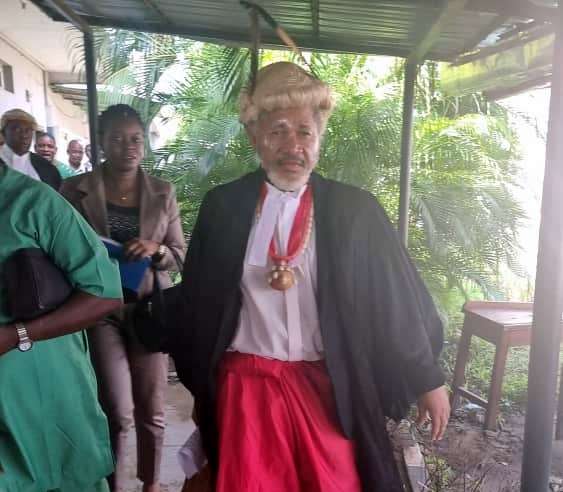 Since the Supreme court has decided the Hijab case, the public has been thrown into different pool of thought and drama. Among the most notorious one is the traditional religa won by one lawyer, MALCOM OMIRHOBO to the court. This lawyer, although firstly worn it to the supreme court but without any appearance but on Monday 28th of June, 2022, he appeared before the Federal High Court sitting in Ikoyi, Lagos. As he stood to address the court, many other lawyers present in the court frown at the dress and label it as an “unprofessional dress” thereby making him to lack audience to address the court. He argued otherwise and maintain that he has the audience to do so, although, the court Per Hon. Justice Tijani Garuba Ringim ruled thus: “You cannot address the court like this as a professional. I will adjourn your matter and you come and address the court if the rule allows you to appear in court like this…”

While the writer is aware that the matter is before an appropriate court, and giving opinion may amount to sub judice, the writer is only doing an academic exercise which is allowed in law and as well, the matter is a matter of public interest, our law governs that it’s allowed to make a comment. The court in the case of Kalu v. F.R.N. (2014) 1 NWLR (Pt. 1389) 479 at 525-526, paras. B-D (CA) per EKO held thus:
“It is commonly supposed that once a writ is issued, it puts a stop to discussion. If any one wishes to canvass the matter in the press or in public, it cannot be permitted. It is said to be sub judice. However, that is a misconception. If it is a matter of public interest, it can be discussed at large without fear of their being in contempt of court. Criticisms can continue to be made and can be repeated. Fair comment does not prejudice a fair trial. The issue of writ is not to be used as a muzzle to prevent discussion. A gagging writ ought to have no effect. The law on this subject is and must be founded entirely on public policy. It is not there to protect the private rights of parties to litigation or prosecution. It is there to prevent interference with the administration of justice and it should be limited to what is reasonably necessary for that purpose. Public policy generally requires a balancing of interest which conflicts. If the law is to be developed in accord with public policy, it must not be too legalistic in general approach. Public policy is an unruly horse to ride but in a chapter of the law so intimately associated with public policy as contempt of court, it must not be too pedestrian. Since the law on public policy is used to prevent interference with administration of justice, it cannot also be used to prevent the due process of law or administration of justice. In the instant case, the Suit No. HU/177/2007 filed at the High Court of Abia State by the appellant was nothing but a gagging suit. The order issued on 31st May 2007 was designed to attain that objective of gagging the 1st respondent from discharging its office created by its enabling law.”

Starting with, it’s worthy to note that a lawyer shouldn’t be subjective, sentimental, emotional or much attach to a case, a lawyer should be objective and law abiding. The court in the case of UBN PLC v. JOHNSON & ANOR (2008) LPELR-CA/C/49/2007 held that:
“I think the difference between both Counsels in this case creates an opportunity to remind ourselves at large of the ethics of the legal profession, the etiquette, the decorum and the dignity that comes along with membership of the profession. In addition, Counsel must be reminded that the need to protect the profession and the honour attached to it must at all times supercedes the sometimes emotional attachment to our client’s causes as the profession is founded and sustained on mutual respect and brotherhood. God forbid the day when by our utterances and conduct we would have lost the wig and gown even while still wearing them. Let us learn to respect ourselves as members of the learned and noble profession as we also thrive to be our brother’s keeper.” Per OWOADE, J.C.A.(P. 52, Paras. C-F)

The effect of the case above is that Mr Malcolm being a qualified lawyer who passed through the Nigerian law school and enrolled to the Nigerian Bar shouldn’t have stoop so low and degrade the legal profession in such an unethical and unprofessional way. No matter what’s reservation or opinion maybe, he ought to have approach the court and file his action in a proper way. Well, the deed has been done, what may the court do?

Arguing against _The Traditional religa”
Starting with, Section 45 of the Rules of Professional Conduct (hereinafter referred to as RPC) provides that:

Arguing for ”The traditional Religa”

It may be argued that Section 38 of the constitution grants the right to freedom of religion and gives room for anyone to manifest and propagate his religion at anywhere and at anytime so far it doesn’t put the welfare of the society or public health in jeopardy.

Since hijab was interpreted by the supreme court to be a fundamental right of any Muslim female who intends to use it hence it will be allowed of traditional worshippers to also appear in their traditional attires even at professional sectors.
It may also be argued that Article 18 of the international covenant on civil and political rights, the United Nations human rights commission described the scope of manifestation of religion or belief in practice, worship, teaching and observance as including:
…..not only ceremonial acts but also such customs as the observance of dietary rights, ”wearing of distinctive clothing (emphasis mine)”, head coverings, participation in rituals associated with certain stages of life, and the use of particular language customarily spoken by the group.

A Brief Review of the Hijab case in relation to the Traditional Religa:

The supreme court while deciding the case was solely faced with the question: “What is the position of hijab in Islam” After reviewing many provisions of the Qur’an and Hadith being the primary source of the Islamic law arrived that Hijab is a ”MUST and FUNDAMENTAL” in Islam therefore, denying Muslim ladies the use of hijab maybe infringement on their fundamental right thereby allowing the use of hijab and dismiss the appeal of the Appellant.
Whereas, the traditional attires, although, it’s well known that it’s being worn by a set of people but if stands the test of law, may fail for some reasons;

What the court may probably do:
Having argued and raised some questions above, it’s my candid perception that the court may not want to put the profession into chaos thereby may strike out the case and throw it into dustbin.
Although, it will be more respected if the court can consider and allow the case to stand relying on the provisions earlier mentioned especially that of the United Nations earlier mentioned. This, although, which I doubt is possibility, will thereby render Rule 6 and Rule 45 of the RPC invalid and inconsistency with the constitution.
In instance where the case is allowed, it simply means a Yoruba man who is professionally called to bar may at his wish dress in Agbada to the court while an Hausa man may decide to wear Babaringada. This will even allow a Muslim lady who consider wearing Niqab (veil) a must to wear it and approach the court to appear. Or an Igbo man, who may announce his appearance in his wrapper.
Won’t this sound scandalous, obnoxious and abhorrent of the legal profession?
What of the general acceptability among the lawyers of the world, what face will Nigerian lawyers show their counterpart in other part of the world?

It’s my candid perception that the court won’t stoop so low to consider that to stand, it will definitely angrily throw it to the dustbin of nonsensical.