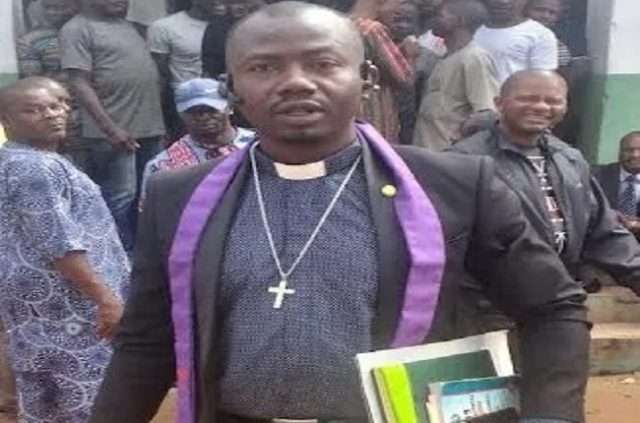 According to reports, the court presided by Worship CB Mbaegbu was progressing smoothly until a matter was called up and Barr Abuchi announced his appearance as a defence counsel fully kitted in clerical robes, roman collar, long cross and a stole around his neck.

There was a dramatic scene at Anambra Magistrate Court sitting in Okpoko, Ogbaru Local Government Area near Onitsha, yesterday, 30th of June when a lawyer identified as Ogbachalu Abuchi Goshen appeared in the full regalia of an ordained Reverend to conduct his matter.

Things however took a dramatic twist when the Magistrate said he cannot appear and address the court in that regalia as we was not robed according to the rules of the profession.

This did not go down well with the Onitsha-based lawyer who objected citing the recent Supreme Court judgement that gave female students backing to wear hijab to public schools as his authority.

He further persisted in his insistence arguing that it was his right and that the objection by the Magistrate was an infringement of his fundamental rights as enshrined in section 38 of the 1999 constitution of the Federal Republic of Nigeria.

As the back and forths between the lawyer and the Magistrate became intense with both staying adamant in their positions, the Magistrate abruptly rose and abandoned the Court for her car.

This caused lawyers and litigants who came for different matters to equally leave the court disappointed and infuriated over the scene.

A Lawyer who was scheduled to appear before the Court, Emmanuel Nzekwe, described lawyer Abuchi’s action as unnecessary. He said the Supreme Court decision is about hijab for ladies and not an invitation for lawyers to appear in court in their religious denominational robes