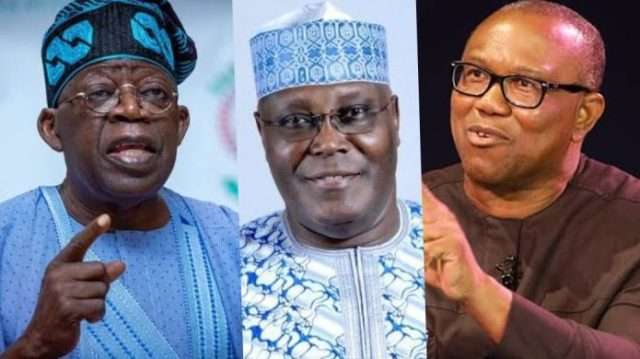 INTRODUCTION
As the next year general election is drawing closer, aspirants from all parties are desperate in achieving their major purpose which is winning election. Despite the numbers of parties contesting the forthcoming general election, the brutal truth is that only four parties are majorly contesting the election, others are still far beyond the reality. The four parties, APC, PDP, LP and NNPP with their respective candidates as Tinubu, Atiku, Obi and Kwankwaso, have been making the headlines of all daily prints, media houses and social medias generally.
In this article, the writer argues that in one or the other way, none of the leading contestants is constitutionally qualified to run for presidency in the forthcoming general election and by default, may make the fourth-runner up in the race to be declared the winner in the forthcoming election if at all he drags them to court.

To start with, in a country like Nigeria where we have opted for democracy, the constitution is always supreme and any other law which is inconsistent shall to its extent of its inconsistency be declared null and void.
The constitution alone cannot walk but it requires the aid of other enactments. In a matter like this, the applicable law is the Electoral act. Hence, any other law or act aside from the constitution which contravenes the provisions of the act shall be to the extent of its inconsistency be declared null and void. In this article, it’s argued that the 4 leading contestants has in one way or the other, violated the provisions of the act and by such, they all are not qualified!
Grounds of defaults are as follows:

The constitution (hereinafter referred to as CFRN) provides that all presidential candidate in any election shall nominate alongside their running mate whom shall be from the political party and shall be deemed elected if the presidential candidate win the election (See section 142 of the CFRN). This was re-enforced in section 29 of the Electoral act (hereinafter referred to as the act). The act doesn’t provide for changing of candidates save in some circumstances like death or withdrawal, in case where such occurs, the party is bound to conduct a fresh primary election within 14 days. (See section 33 of the electoral act)
Recall that, the APC presidential candidate; Asiwaju Bola Ahmed Tinubu, LP presidential candidate; Peter and Obi and NNPP presidential candidate; Kwankwaso had earlier nominated Aminu Masari, Doyin Okupe and Ladipo Johnson as their running mates respectively. Although, the candidates named their running mates as “placeholders”, a term which is alien to our law. Surprisingly but expectedly, all the running mates withdrawn thereby forcing the contestants to seek for other running mates, Kashim Shetima, Ahmed Datti Yusuf and Tunde Idahosa were later nominated to fill the vacuum. Although, nor the constitution or the act allows for a vacuum but in filling a vacuum, there’s a legislated process. The legislated process is as provided in section 33 of the Electoral act. The parties must within 14 days of such withdrawal conduct another primary election but it’s so unfortunate that none of the affected parties; APC, LP and NNPP complied with the act.
It’s therefore submitted that the three parties earlier listed violated the said provisions of our law and thereby be not qualified!

The Act requires political parties to notify INEC of their intent to conduct primary elections at least 21 days before the date of their convention.
Section 82 (1) of the Electoral Act 2022 says, “Every political party shall give the Commission at least 21 days’ notice of any convention, congress, conference, or meeting which is convened for the purpose of ‘merger’ and electing members of its executive committees, other governing bodies or nominating candidates for any of the positions specified under this Act.”
Subsection (5) then says, “Failure of a political party to notify the Commission as stated in subsection (1) shall render the convention, congress, conference, or meeting invalid.”
You can’t put something on nothing and expect it to stand hence an invalid convention can’t produce a valid candidate.

Records at INEC show that the APC notified INEC of its intent to hold its convention on May 23, 2022 (before INEC granted it an unfair extension, which other parties also benefited from) and held its convention on June 8. That’s just 17 days’ notice, which falls short of the 21 days’ notice the Electoral Act 2022 requires.
Based on its May 23 letter to INEC of its schedule of primaries, the APC’s June 8 primary election is invalid in the eye of the Electoral Act 2022, base on this, the APC hasn’t produced a valid candidate to contest the forthcoming general election.

MEMBERSHIP FORM SUBMISSION
The act requires parties to submit their membership registers to it at least 30 days before their primary election. Section 77 (3) of the act provides thus:
(3) Each political party shall make such register available to the commission not later than 30 days before the date fixed for the party primaries, congresses or convention.
The penalty for failure to abide by this provision of the Electoral Act is exclusion from participation in elections of the candidates of the political parties that infract the provision. Section 84 (13) Electoral Act 2022 says, “Where a political party fails to comply with the provisions of this Act in the conduct of its primaries, its candidate for that election shall not be included in that election for the particular position in issue.”

CONCLUSION
Despite the clear provisions, INEC went further to include the names of the defaulters in his list, can we say INEC is ignorants of her laws or just tunning to the music of some men in neglect of our extant law?
Conclusively, the four leading contestants have in one way or the other violated the provisions of the Electoral act and thereby not qualified to contest the election because you can’t put something on nothing and expect it to stand, it will definitely collapse!

Although, all these arguments are liable for consideration only when they’re being challenged in court but will the court dance to the tune of bending the laws to satisfy a party or candidate interest? We definitely hope not!
Dura lex, sed lex
Interesting times ahead, comes 2023

Current Surge In Emigration Of Nigerians: To Which End