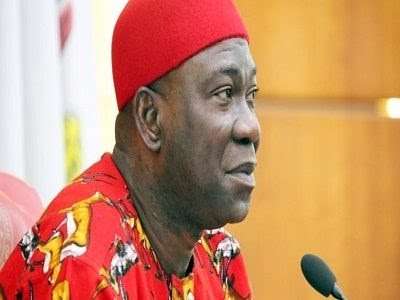 Former Deputy President of the Senate, Ike Ekweremadu and his wife, Beatrice, on Thursday, appeared before the Uxbridge Magistrate Court in the United Kingdom over alleged organ harvesting charges.

This platform earlier reported Ekweremadu and his wife are currently being held in the UK over conspiracy to harvest the organs of Ukpo (a proposed kidney donor to Sonia Ekweremadu), whom the UK authorities believe is 15 years old

Addressing the Court, lead prosecutor from the Metropolitan Police, said the Ekweremadus coerced the minor, David Ukpo to donate a kidney to their daughter, Sonia.

In a report by Channels TV, said, the case has been adjourned to July Thursday, 7, 2022, at Westminster Magistrate Court to enable the UK Attorney General, Suella Braverman, to determine whether the case will be tried in the country or Nigeria.

THEWILL had reported that the two Chambers of the National Assembly has charged the UK authorities to ensure the former Deputy Senate President is accorded fair hearing.

On its part, the Speaker of the House of Representatives, said the Green Chamber would interphase with its counterpart in the UK for diplomatic resolution.

However, the Senate and the lower Chamber have also resolved to send delegation to the UK on the issue.

“There will be a delegation to London to see Senator Ike Ekweremadu and his wife. A delegation from the Senate Committee on Foreign Affairs of the Senate will leave in the next two days for London for that purpose. I want to urge all federal government institutions that can do anything to ensure that justice prevails in this case, that they do so”, Senate President, Ahmad Lawan, said on Wednesday, adding that the Nigerian High Commission has engaged the services of lawyers in the UK to defend Senator Ekweremadu