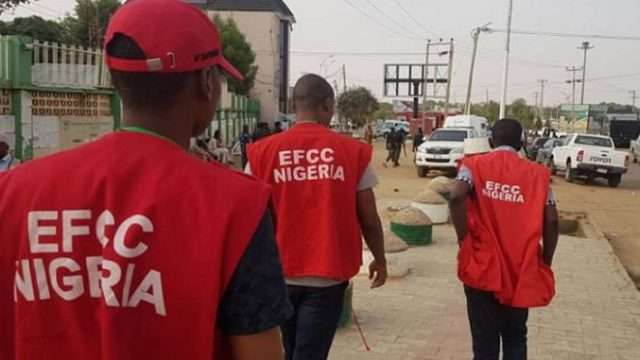 Operatives of the Economic and Financial Crimes Commission (EFCC) in Lagos has on Tuesday, secured the conviction of one Li Lei Lei, a Chinese national, to 24 months imprisonment for mutilating the Nigerian currency before Justice I. Nicholas Oweibo of the Federal High Court sitting in Ikoyi, Lagos.

The convict was arraigned on a four-count charge bordering on tampering of the Nigerian note, an offence contrary to and punishable under Section 21(1) of the Central Bank of Nigeria Establishment) Act.

He pleaded guilty to the offence.

In view of his guilty plea, the prosecution counsel, Ayanfe Ogunshina, moved to review the facts of the case.

Ogunshina narrated that the convict was arrested on May 17, 2022, while trying to board a flight to Kenya.

He also told the Court that, while the Immigration officers were searching for drugs and incriminating items in the convict’s luggage, he angrily tore to pieces the Naira notes to the tune of Three Thousand, Two Hundred Naira (N3, 200).

He further told the Court that the defendant was, thereafter, arrested by officers of the Department of State Security, DSS, and handed over to the EFCC for investigation and prosecution.

The prosecution tendered the voluntary statements of the convict, which was written in Mandarin and translated into English by a known interpreter to the defendant.

The prosecution also tendered the handover note from the DSS to the EFCC and the shredded Naira notes.

Ogunshina, upon presenting his case, urged the court to convict him as charged and sentence him accordingly.

Justice Oweibo found the defendant guilty and sentenced him to six months imprisonment on each count, with an option of fine in the sum of N200, 000.00