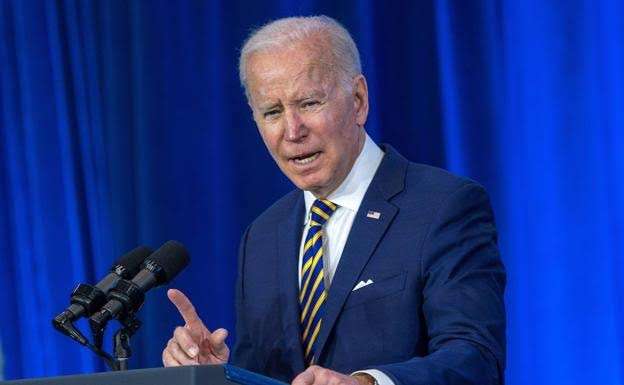 President Joe Biden has led prominent Democrats in calling a Supreme Court decision further expanding gun rights a “dark day” for the country that “should deeply trouble us all.”

The Supreme Court released its ruling on New York State Rifle & Pistol Association v. Bruen on Thursday morning, with all six Republican-appointed justices overturning a New York law that required residents to show “proper cause” in order to carry a concealed handgun.

The broad ruling from Justice Clarence Thomas is likely to undercut other gun safety legislation across the country.

In a statement, President Biden said he was “deeply disappointed” in the ruling but added that he was “committed to doing everything in my power to reduce gun violence and make our communities safer.”

“Since 1911, the State of New York has required individuals who would like to carry a concealed weapon in public to show a need to do so for the purpose of self-defense and to acquire a license,” Biden said.

“More than a century later, the United States Supreme Court has chosen to strike down New York’s long-established authority to protect its citizens. This ruling contradicts both common sense and the Constitution, and should deeply trouble us all.

“As the late Justice Scalia recognized, the Second Amendment is not absolute,” Biden continued.

“For centuries, states have regulated who may purchase or possess weapons, the types of weapons they may use, and the places they may carry those weapons. And the courts have upheld these regulations.”

New York Gov. Kathy Hochul, a Democrat, said she was “sorry that this dark day has come.”

“That we’re supposed to go back to what was in place in 1788 when the Constitution of the United States of America was ratified,” Hochul said during remarks Thursday morning.

“I would like to point out to the Supreme Court justices that the only weapons at the time were muskets. I’m prepared to go back to muskets.

“I don’t think they envisioned the high-capacity assault weapon magazines intended for battlefields as being covered, but I guess we’re just going to have to disagree.”

Hochul said she was considering a special session of the state Legislature, adding on Twitter, “It is outrageous that at a moment of national reckoning on gun violence, the Supreme Court has recklessly struck down a New York law that limits those who can carry concealed weapons. … Just as we swiftly passed nation-leading gun reform legislation, I will continue to do everything in my power to keep New Yorkers safe from gun violence.”

Some of the state’s top law enforcement officials also responded.

The New York state attorney general’s office said in a statement, “We are currently reviewing the decision from the Supreme Court on New York’s ability to regulate who can carry firearms in public.

“But we will continue to do everything in our power to protect New Yorkers from gun violence and preserve our state’s common sense gun laws.”

Manhattan District Attorney Alvin Bragg said, “At this very moment, my office is analyzing this ruling and crafting gun safety legislation that will take the strongest steps possible to mitigate the damage done today.”

Other prominent New York Democrats expressed frustration at the potential fallout from the ruling.

“We will work together to limit the risk this decision will create once it is implemented,” said New York City Mayor Eric Adams.

“And we cannot allow New York to become the wild, wild West. That is unacceptable. We will not allow our city to live in fear that everyone around us is armed, that any altercation could evolve into a shootout.

“We will not allow the men and women of the police department to be subjected to further danger, making their already difficult jobs even more harrowing